I was looking up at the hill as we put our gear on, and thinking to myself “this doesn’t look too bad, as Chukar country goes. It is basically a gentle slope.” Then I laughed to myself a little. I had been in much worse and really this was just average Chukar country. It was not especially rugged or treacherous for Chukar, just average. Before having time to reconsider our plan we were geared up and starting into our ascent. Bret said “sometimes we see a covey or two on the way up, but not always.” The rest of us just kept walking up, up, and up. We would ascend to the first peak only to have another exposed behind it. We would hike up to that one to see yet another, and on, and on it went. Until finally Bret raised his hand. I wasn’t sure what was going on exactly, and I couldn't see much. I hadn’t seen my dog in a few and before I could even wonder what was up guns were blazing. I was last in the line of four and never even raised my gun. One bird fell and before Brett's dog Cash could finish the retrieve a small fox jumped from his hide and sprinted back behind us staying just out of gun range. His coat was beautiful rusty red in the early morning sun. I think he was hunting Chukar too, and was probably pretty unhappy with us for ruining his plans. Once the action was over and the bird was collected we were back to our main activity of walking up, up and up. Just as we got to what would turn out to be the highest peak we looked up to see my dog Sunnie, and Cash locked 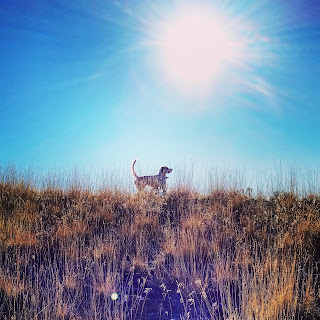 up solid. As we got closer Cash broke and went on like he was trailing up the ridge as though the birds had run over the top. We all assumed he was right, but as I approached where Sunnie was still standing I could see by the look in her eye that she thought the birds were just off the edge from her. I was just about to say something when they exploded downhill tucking and rocketing down the slopes like tiny fighter jets. Guns went off and two birds fell tumbling down the steep hill. Once birds were collected we all had a laugh. It was funny that only one of the six of us had the birds right. We stood on the top and planned the next step.

The plan was for Brett, Cash, and his long time friend George to take the south ridge. George's son, Cody, Sunnie and I would take the north ridge. Cody had hunted here before and he seemed pleased that we would get the north. I was happy to split into a smaller group. I am always happiest hunting in smaller groups or even alone. We said our goodbyes and went our separate ways. With Sunnie running out front I was feeling really good about our chances to get good opportunities on pointed birds. 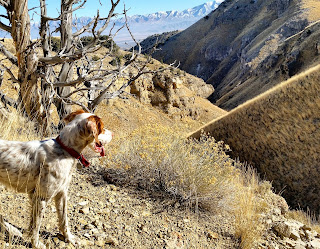 For the first time that morning I started feeling relaxed and was able to take it all in. The view from that ridge was just breathtaking. There is a magic walking these mountains that are so vast, barren, and dry that very little can survive on them. It is brutally hot in the summer and the only shade is that of the very sparse Pinyon Juniper trees. Water is a rare commodity and it is amazing to me that wildlife finds a way to get moisture here in the summer let alone enough water to survive, even thrive. In winter the cold is bitter and the wind relentless blowing icy snow that stings faces. The north facing hillsides freeze solid and the footing becomes nonexistent. It is country of extremes for sure. However, there is beauty in all things if you look for it, and in these mountains it abounds. The depth, textures, and contrasts are like no where else. You can see forever, and the clear sky is as blue as I can imagine possible. The yellow cheat grass, contrasts against rock and and the steep hillsides offer a visual depth that is difficult to describe. The howls of coyotes, and the occasional screech of a hawk can be heard in the wind, but the relentless vocal mockery of the Chukar is maddening, and beautiful at the same time.

As I was daydreaming about all of these things I was suddenly shaken awake by the gun fire that was obviously coming from Brett and George. I said “it sounds like they found some.” We walked on and on with Sunnie still searching high and low, and hearing the constant pops coming from Brett and George started to weigh on us. Cody jokingly said “I think ol' Brett sent us this way on purpose.” 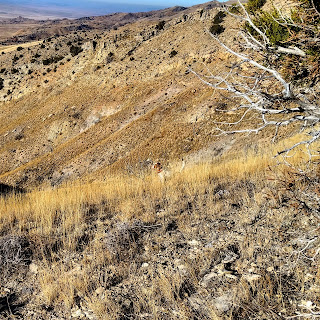 We chuckled a bit and walked on. Just when we were getting discouraged Sunnie's body language suddenly changed and she was very excited and interested. She ran bigger and bigger trying to turn the bird scent into birds. When she finally locked up 200 yards down the ridge we started to her, but before we got there birds went everywhere from all around us, and then from where she was at birds went every direction. We didn’t do well with the guns and they all flew away. I was a little sad because Sunnie had not done as well as I thought she should have, and we had not done a thing to help make up for it. I was certain we had seen all the birds on the mountain, but we went on anyway.
When she locked up again she would be true to her word and Cody and I would do better also. We walked in to flush and by the time we had birds collected we could hear the devil's red legged friends mocking us from every direction. All of the sudden they were everywhere. From that moment on 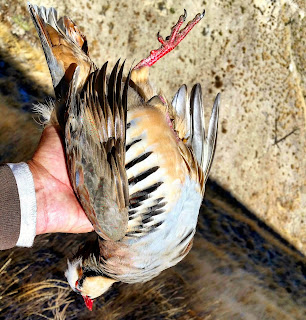 Sunnie and the birds put on quite a show. There was constant slightly evil mockery from those that we could not find. I can't begin to describe how many birds were seemingly everywhere. We had many points and flushed many birds. At one point someone shot and the whole hillside across the canyon came alive with flushing chukar. It was among the most amazing things I have witnessed in my bird hunting life. My day came to an end, and almost too soon with Sunnie on point in the bottom of a narrow canyon. Cody and I had gotten separated so I walked in alone. When the birds flushed my bottom barrel connected with one and then my top met 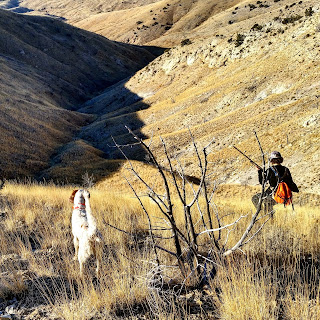 another to finish my daily limit. It took only a short time for Cody to finish his and we were on our way back to the top. Yes, it was uphill both ways. You've heard the stories.

When we got back to our point of separation Brett contacted us to say they had finished their day and were headed back our way. When they met back with us we all exchanged stories of the days events and full bags. It was great that everyone had such an amazing time. We wandered downhill now everyone enjoying the walk back to the trucks. Sunnie and Cash treated us to a point each, and we all enjoyed watching the masked devils fly away. Only when you have spent countless hours, boot leather, blood, sweat, and blisters working really hard for a bird or two can you truly enjoy watching birds fly away out of a point with full game bags. 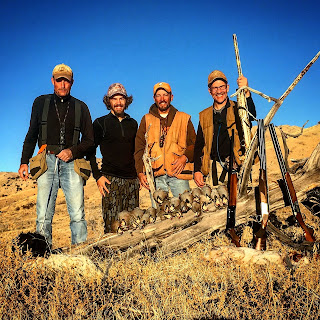 There might be sweeter hunts than this one, but I have never been on one. A fantastic day, with fantastic people, in a fantastic place, chasing a great game bird. Perfect!

Posted by bquackn@gmail.com at 6:33 PM 2 comments: