EXCUSE ME WHILE I DISAPPEAR INTO THE MAGIC OF AUTUMN

I could barely distinguish the early morning outline of the Wasatch mountains as I drove toward them. True to myself, I had something unusual playing on the radio. It was an old Sinatra record that I had recently taken an interest in from the '50s. Frank was singing about being heartbroken and feeling lonely in a crowded room full of happy people enjoying themselves. The last line was sung sadly as only Frank can sing it, “Excuse me while I dis-a-ppear.” and the song ends abruptly. This seemed appropriate even if slightly out of context. I was about to disappear into the fall mountains where I am most at home with my favorite sidekick, Tic. I pondered the line over and over in my head, and I even tried to sing it a couple times, only to rediscover that I am still no Frank Sinatra.

It was still before sunrise when I pulled my dusty Tacoma into an old familiar spot, strapped a Tek 2.0 GPS collar on Tic and sang that Sinatra line one more time as we began to disappear into the forest. I enjoy hunting alone even though I know I shouldn’t. Being alone in the wilderness with a good dog is my favorite way to be alone. As my old friend cast out in front of me like he has for so many seasons, I couldn’t help but laugh at him. He was crashing through the cover in a most reckless fashion like he did when he was a pup. I was really enjoying his unbridled enthusiasm when he ran right through a small brood of ruffed grouse. I was no longer amused. He did stop to flush. He had just gotten taken by the moment and who could blame him? It was the first hunt of the year. It's funny how even old men and dogs still get excited about the first hunt of the year.

I released him, and we were on our way. One of the birds he had flushed was perched on a tree limb about fifteen yards in front of me. I stopped and listened as it made that funny little cluck they make. It is somewhere between water dripping in a nearly empty metal tank and a clucking chicken. I started to explain to this bird just how lucky he was but he wouldn't hear of it as he flushed away through the quaking aspens.

My old pal did eventually get it together and start pointing birds, but again and again, the bird would 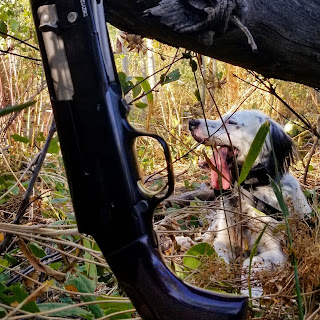 escape through the trees, but I couldn't see them. I had forgotten just how hard it is to see a flushing grouse before the leaves fall. “This is why I prefer to hunt them later,” I confirmed once again that I totally agree with myself.

Tic and I eventually came to a clearing out on a ridgeline. For some reason, I stopped and turned around to look behind me. What I saw brought a calmness to my heart. “There it is! The magic.” I said out loud as if Tic somehow knew what I was thinking. My eyes found it as I discovered a view behind me that I had almost missed. I could see forever. There were mountains and valleys, all covered with trees, brush, and rock. I could see forever.  A few of the trees had just a hint of orange and red contrasting against the dominant green canopy as a reminder that the seasons are about to change. That magic exists in almost every hunt if you look for it. It is rarely about what is done with the gun. It's more about what happens before after and between what happens with the gun.  It is romantic and beautiful and exists in the breath of the wind as it tickles the treetops. It sparkles in the sunlight as it glances off those fluttering leaves casting shivering shadows on the forest floor. It's in the songs of the birds and the gait of a good dog as he searches for his reason over through on among it all.  It is where you find it, but it can only be seen when the mind slows down enough to feel it, and it's magical. It's the reason I like to disappear and hunt alone with a dog. 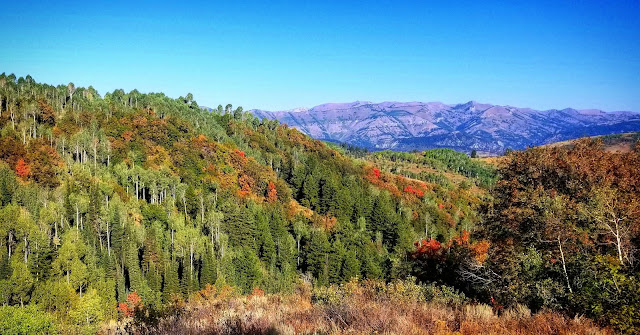 I turned away reminding myself that this was only the first day and that it would be hot soon. I felt a smile come to my face as I thought about the possibilities of the season in front of me.

“Did Tic just stop?” I thought just before the point alarm on my GPS went off. Sure enough, he was on birds. I 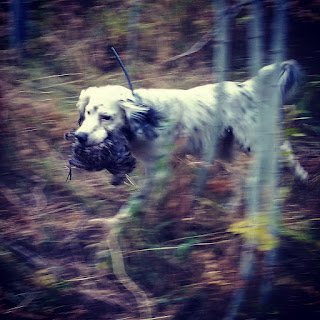 hustled to get to him as I could hear a bird flush out through the trees. Then it happened. A young ruffed grouse flew straight at me. It was not to be his day. I let a light load of 7 1/2s loose from the A5 Sweet Sixteen I was packing. Feathers flew as the young bird tumbled hitting tree branches on its way to the forest floor. There was another flush at my shot and then another. I lost count. I snapped a shot through the trees at one and missed. Another caught my eye, and I snapped one at him. I wasn’t sure if I hit it or not, but Tic knew and retrieved it to hand. All of this in just a few seconds.

After the moment of excitement, I would have been content to call it a day, but Tic wanted to hunt. He was casting like a young dog just happy to be about his business. I gave him his head and followed in admiration. It didn’t take him long to find the subject of his search. It was a single dusky on the upper edge of some pines. I stood admiring what little I could see of the old dog through the belt of thick Mountain Ash that bordered the pines. Without warning the bird flushed and thundered down the edge of the evergreens. Swinging left, I tracked it with my little sixteen and pulled the trigger just as the barrel caught up to and passed the birds head. The big bird fluttered to the ground before rolling down the steep embankment while its wings thumped against the last breath of life. Tic couldn’t see the bird fall, but old Mr. Reliable raced to toward that familiar sound that meant there was a bird to fetch. It was at least 80 degrees by the time he brought that bird to hand.

I looked down at my partner standing there staring me in the eye. His mouth was full of feathers, but he seemed proud and accomplished. I too was proud, but enough is enough. After all, we have a whole season ahead of us that will be full of days that I set aside for disappearing. 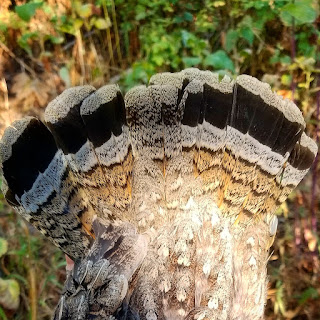 Posted by bquackn@gmail.com at 4:55 PM