SETTER TALES AND MALLARD CURLS: LATE SEASON UTAH CHUKAR:         Stumbling over the top of the hill my eyes found Sunnie standing on point 100 yards from where I crested. After taking a couple mor...
Posted by bquackn@gmail.com at 9:27 AM No comments: 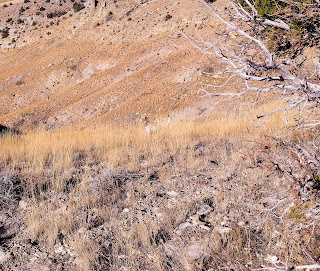 Stumbling over the top of the hill my eyes found Sunnie standing on point 100 yards from where I crested. After taking a couple more steps I could see she was actually backing Tic who was 30 yards out in front her. I took three more steps and the mountain exploded with chukars. As luck would have it I was just out of range. I stood with my hands on my hips gasping for air, and wondering how many times this has happened to me. It was the first flush of the day and it looked like they didn’t go very far so I came up with a strategy to get on top of them and released the dogs from their stand. I put the dogs at heel so they wouldn’t continue to push the birds up the mountain and we quickly made our way to the other side of the ridge so as to sneak around on them. We worked along the side hill to gain elevation on the north facing slope. It was difficult with the slippery footing and uneven terrain, but on a gorgeous, sunny, February day in western Utah I couldn’t imagine doing anything else. The mid-morning sunlight was reflecting off of the snowy north facing slopes. It really brought out the brilliance of rock and grass of the bare south facing slopes. The beauty of the world we live in that few seem to notice these days is just breathtaking. The scenery wasn’t all that was making me short of breath. The clime was exhausting, and my legs were starting to feel as though they were made of jello. I was thinking to myself next year I need to work harder at fitness. When we got to the highest point on the hill we stepped over the top to start working back toward where the big covey had landed. Just as I peaked over the hill I noticed Sunnie had slipped off somewhere. I guess I was not paying attention while as I was struggling and gasping for air. It wasn’t long before I spotted her running at full gate toward the location that I thought the birds had gone, and on the wrong side of the wind. Sure enough she stopped to flush as the birds escaped across the canyon and over the next ridge. Dang it Sunnie! I stood catching my breath. The evil chant of the Chukars on the next ridge started to really irritate me. I wanted to raise my fist and yell at them like a grumpy old man telling those dang kids to stay of his lawn, but I didn't. I had been climbing for three hours so I was not happy at the thought of walking down into the canyon and back up to the top of the next ridge to try once again to get in shooting range of those evil little birds. Being as driven as I am to get birds isn't always easy so I tightened my boot laces, thought it's not going to kill me, and off I went. When I got to the top of the next ridge I could hear and feel my heart pounding in my chest, and then I felt it sink as I realized that those dang birds had landed in the middle of big patch of pinion junipers, and that I probably wouldn’t be able to see them to shoot even if we did find them. “Boy, I cant catch a break”, I said to myself. The dogs were already down in the trees so I followed, and when I found Tic he was standing tall. Moments later I saw Sunnie below him standing birds in another spot. Hustling down the hill I slipped on some loose shale, and fell down smacking the middle of my spine on a rock. My clumsiness had made a real racket, and I could hear birds jumping. I couldn’t see them. I was flat on my back and my legs tingled like your arm does when you hit your funny bone. For a few minutes I thought I might be in real trouble. I noted as I was laying there that I saw a glimpse of two birds that looked to have landed down the ridge 200 yards or so. I looked my gun over to make sure I hadn’t put any new scars on it. I love that 525 Browning, and thank goodness I had managed to hold it out of harms way. It was as clean and beautiful as ever. Several minutes went by before I was feeling like I might be able to get to my feet. My legs were still feeling sort of asleep as I struggled to get up, but get up I did. I walked around for a minute or two trying to decide if I needed to give up the hunt or go on, but the more I walked the better I was feeling so I decided to continue. Remembering where I thought those two birds had landed I worked my back up, again. Once at the top of the ridge we once again worked down the ridge toward the place I thought they would be. Wasting no time at all Sunnie made scent and slammed into a 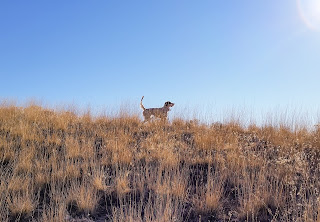 beautiful point. This was the best situation we had all morning. I was quickly walking in almost forgetting the pain in my back when I saw Tic quartering back to us right toward where the birds were from the wrong side of the wind. He couldn’t see Sunnie. I knew what was going to happen before I even got there. I had no choice, so I whistled the whoa command with hopes I could stop him from running through the birds. He stopped and the 10 or so birds that were there jumped from the sound of the whistle. I was still 60 yards out. “This just isn’t my day” I thought. I was really frustrated now, and I could see the dogs were too. With a sigh I made a plan to start my descent and we went on our way feeling a little defeated. We worked down the ridge back in the direction from which we came trying to get back to the place where we first found birds. At one point we came to a skyline and another big covey of 75 birds got nervous and flushed from the other side of the canyon. I just stood and laughed. I am nothing if not persistent so we hunted on. I wondered if I would ever fire a shot on this day. We had seen so many birds and nothing had went our way. The dogs kept working and I tried to keep my chin up. Another hour had gone by before Sunnie stopped and pointed again. I hustled in expecting the birds to jump before I got there. I had no Idea where Tic was either so I half expected him to mess things up, but not this time. It was a single bird, and he made a mistake and held. I was so excited when it jumped 10 yards in front of me that I almost panicked. Calmness prevailed, and all in one continuous motion my gun jumped to my shoulder, found the bird, and the bottom barrel connected. “fetch Sunnie”, I yelled as she was already in motion. Then my heart sunk again as I saw the winged bird running away 100 yards down hill. I couldn’t believe it. Was this little bugger going to get away too? Experience has taught me that if I can stand and watch often a crippled chukar will crawl under a sage brush or rock and hold at some point. This bird did that and I was able to direct Tic to it. Finally 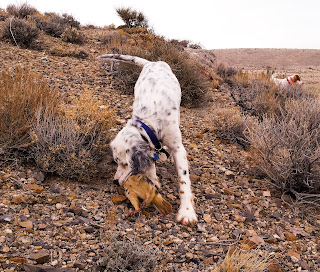 we had a bird in hand. I had to walk back up to start hunting again but I had new life in my legs, my back hurt, but it wasn’t as bad now. As we worked the rest of the way down the ridge Tic, and Sunnie would take turns pointing and backing until Tic found the final bird of my limit down in the bottom. They really looked like a magnificent team even in their fatigued state. I was grateful to be on the hill in the company of the two dogs I had been cursing earlier. Its funny how we sometimes judge our four legged friends by the circumstance more than their actual abilities.

I finally took some pictures and started the 90 minute walk back to the truck. Together the dogs and I had 10 sore feet, and one very sore back, but a definite feeling of accomplishment. The harder you work the sweeter the prize. It's true.

BTW. I'm fine its nothing more than a deep bruise. 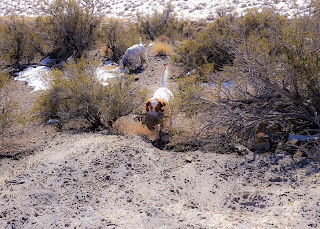 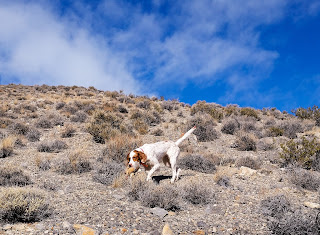 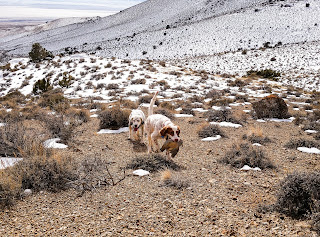 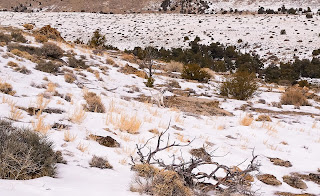 Posted by bquackn@gmail.com at 9:24 AM No comments: