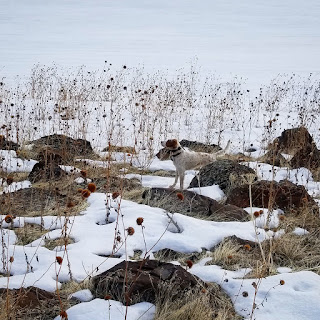 I cringed with each step as it broke through the crusted snow. The quieter I tried to be, the louder the crunch. "I will never get close enough to shoot, and she has been on point for a very long time." I thought. I paused and looked down at my GPS to see that I still had 40 yards between Sunnie and I. Soon I came to a southern exposure that was dotted with lava rock. The black rocks were bare, and I was able to hop from rock to rock in relative silence for the last 30 yards, but Sunnie looked unsure when I got there. I wondered if the birds had already flushed. I released her with a tap. She took seven or eight steps and locked up again. Now my heart raced, and I quickly returned to rock hopping. I passed her with the anticipation killing me. I took one more hop, and while in mid-air, the ground erupted with the familiar chirps along with the thunder of many wings in unison. I tried to set my feet quickly but rushed my first shot missing completely. My second barrel caught up to them, and one of the trailing birds fell victim to the edge of my pattern. It hit the ground running toward cover while my usually reliable setter chased the covey. Huns have always had a way to push her crazy button. She returned shortly, and at hearing the dead bird command made short work of running down and retrieving my cripple to hand.

A brisk wind stiffened my smile as I admired the bird in my hand. I was pleased on so many levels. A 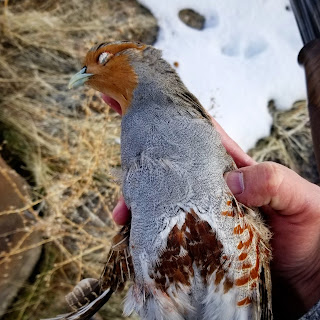 week before, Sunnie had slipped on an icy mountain face and slid 30 feet down and came up lame. I worried that she might have re-injured the CCL that she partially tore a year ago. Fortunately, she improved to the point that I wanted to test her. Watching her chase that covey put my mind at ease. This hunt was along shot at best. Earlier that morning, deep snow prevented me from getting within 10 miles of the area that I wanted to hunt. So as a last resort, I called a landowner and got permission to hunt a spot I hadn't walked in a long time. It was where I shot my very first hun at 16 years old. This bird was a descendant of the coveys that I chased when my hair was long, and my boots were without Gortex. The birds fell on hard times twenty years ago, and after several years of bird-less walks, I finally gave up hunting there.

I put the bird in my game bag and started crunching my way in the direction the covey flew. I was happy with one bird, but there were at least 20 birds in the covey. Certainly, taking another bird or two for dinner would be okay if I could find them again. It wasn't long before Sunnie found them again. I relocated Sunnie several times, but this time they played it differently. They spread out and ran across the hard surface and flushed one or two at a time just out of range. Most of them left the property. I stood giggling like a fool for having just been worked by a group of small birds when a straggler flushed at my feet. I released a load of 7.5s from my bottom barrel that produced a puff of 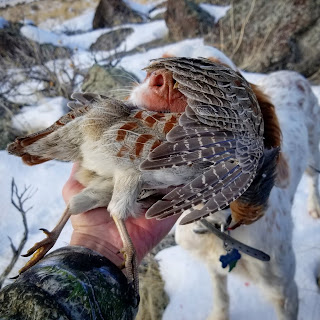 feathers and Sunnie was quickly on the retrieve.

Two birds in this nostalgic place? I was delighted. Memories of old dogs and friends raced through my mind as I made my way back toward the truck. I was so lost in thought that I was startled when my point alarm went off again. "No Way!" I thought. My Handheld said that my girl was on point at two hundred and sixty yards. I was so excited that I covered the first two hundred like I was on horseback, but as I got closer, the crunch of my steps caught my attention again. This time there weren't as many rocks but I closed the final distance as quietly as I could. Sunnie stood confident and motionless like I have seen her so many times. She still had blood on her face from the last retrieve. I 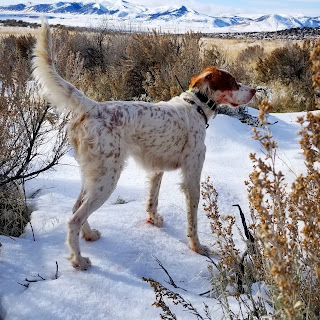 walked passed her with the respect that she has earned. I put one foot down and then another, each one more unnerving than the last until finally, another big covey exploded from the cover. This time I was not frazzled by their timing, and each barrel killed a bird clean. "Fetch!" I yelled while I fumbled with shells. Just as I got one in the bottom barrel, up came the straggler. I closed my gun and brought it to my shoulder in one motion. The gun followed my eyes to the bird, swung past it, and with a pop, the final bird of my Utah limit fell to the snow.

Such a beautiful day in a special place. 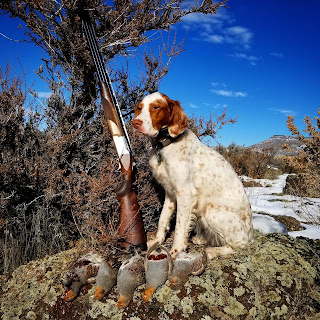 Posted by bquackn@gmail.com at 7:53 PM 3 comments: