It was my day off in January. You know, right after the holidays. I usually go hunting on days that I don't have to work in January but I had not made any plans to go. I didn't have anything in mind or even the thought of a good place to go. I woke up trying to think of something good to do. I did have a new gun to try out. Though I was feeling a little bit lazy and lacking motivation I loaded Sunnie, some basic gear, and the new Browning A5 Sweet 16 that I had recently acquired in the truck and sat in the driveway trying to think of someplace close to go. The word close made me laugh as the thought rolled through my mind. I haven't hunted close to home all season. I laughed, as I started the truck, backed out of the driveway, filled up at the gas station, grabbed a breakfast burrito and some Cliff bars, and started the 3 hour plus drive to a place I had only hunted once before. On that day earlier in the season we saw a lot of birds but the circumstances were always against us. They got above us on the hill, the wind always seemed to be wrong, and numerous other things really limited our success.

After the grueling drive, I was excited to see that there were no tire tracks in the snow on the little two-track that led to the mountain. I was confident if it had not been pressured we would do well. Several minutes later Sunnie and I were into our climb. The wind was in our face. Normally every dog guy likes working into the breeze but the wind was blowing down the hill. Chukar run like daemon spawn from holy water if they are above you and that is just what happened. Sunnie did her best and I can see no wrong in her work but the birds were above us. She got them pointed but I watched them run out of her point right to the top of the hill and flush back over my head too high for the gun. Often they will fly a short distance and land in sight but these were late season birds that had acquired wisdom from experience and continued until I could no longer see them. They could have landed anywhere in that desert maze of mountains.

It was still early and I had no quit in me. Sunnie was fresh and ready to go so we continued several miles until we topped the highest peak. The view from the top was incredible. The 10:00 AM sun was bouncing light off of the snow crystals that were on the north facing slopes. I paused to take it in but Sunnie had other plans. I had taken my eye off of her what seemed like only an instant and she was gone. I looked at the tracker it showed that she was 345 yards away downhill on the wrong side of the truck. Of course, she was headed someplace I had no intention of going. Just then the point alarm went off. Both irritated that I had to lose elevation and excited at the same time I lost several hundred yards of very steep elevation that I would have to regain later. All that went away as I closed the distance and she was standing as beautiful as ever. Now I was just pleased that she had done so well. By the time I got to her she had loosened up and was giving me that "I don't know where they went" look.
Trusting my dog, I released her she ran 75 yards along the side hill and locked up again. I hustled trying to close the distance but with 40 yards still to cover the birds got nervous and flushed. I watched 20 birds glide around the corner and out of sight. One late flusher made the mistake of not following the covey. He flushed back in my direction. My new Sweet Sixteen Browning was lightning fast to my shoulder. I swung through the bird and missed the first shot but made up for it with the second. It folded up and disappeared into the depths of the canyon. Sunnie started into the abyss on a recovery mission. And minutes late carried the dead bird back up the hill and delivered to hand.

The value of a pointing dog that retrieves to hand has never been greater than when hunting chukar. I was thinking about this as I struggled to gain back the elevation I had lost in order to get back to the east side of the mountain range where I was parked. It would have been really tough if I had to go clear to the bottom of the west side to recover my dead bird.

I was huffing and puffing when I got back to the crest. My heart was pounding like a jackhammer in my chest. Sunnie didn't seem bothered by any of it she went on hunting. Finally, I was back on the right side of the mountain. There was a long ridge that extended to the east and had several little side ridges and draws with rock outcroppings that came off of it. That is what I had planned on hunting when I left the truck. I had wasted a lot of time on that other side It was almost 1:30. I needed to cover ground if I was going to hunt it all and make it to the truck by dark.

Moving quickly down the gentle slope I covered ground as quickly as I could encouraging Sunnie to stretch out. She was a searching machine covering mile after mile but without a bird contact. With an hour of daylight left, we were getting close to the end of the main ridge-line. I was tired and had just about given up on finding any birds. The breeze had changed direction at some point and was now blowing gently up the hill. Even the always optimistic Sunnie looked a little discouraged when she ran by to check in.

Later I was feeling done in and contemplating what the shortest route back to the truck was when my tracker vibrated. "Was that the point alarm?" I thought as I glanced quickly at the screen. It said she was standing 125 yards away. It looked like she might be out on the very point of the ridge. My tired legs were given new life as I hurried to find her. My hopes were crushed when I finally got a visual. She was standing there looking down the hill but her tail was down and she wasn't on point. I wondered what in the heck was going on. When I got to where she was standing she broke loose and went 150 yards straight down the hill with serious focus and stopped again with the same look. I wasn't sure what to do or exactly why she was behaving in this way.

Down was the way to the truck and the path of least resistance so I went to her again without much thought. This 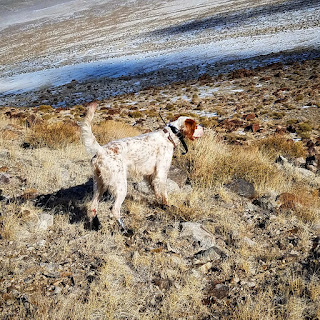 time she looked up at me as if to say, "this way dummy.” She took off running another 100 yards straight into the wind and stopped again. Only this time her tail was high and her intensity was through the roof. A smile ran across my face. "Had she really known there were birds here from the top of the hill?” I thought. I walked out in front of the dog and wandered around but nothing flushed so I returned to her. I tapped her on the head and gave her the release command. Again, she went straight into the wind 80 yards and locked up tight. Now she was right at the edge of the final bench the birds had to be on the steep hill below her. I moved out in front of her and onto the hillside with the Sweet Sixteen I had almost forgotten that I was carrying at the ready. I carefully found the safety with my finger and kept it there as I walked in. Suddenly a single chukar flushed at my feet. The little gun found it and brought it to the ground without me thinking. With the shot, the earth around me exploded with flushing chukar. They were everywhere. I missed one and then the Sweet found one and then another, birds were still flushing. Another bird jumped at my feet the sixteen found that one too. I was doing math in my head and any way I added it up that was a five-bird limit counting the one from the other side and we still had a half hour of daylight to spare. 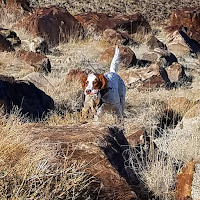 Sunnie was still recovering birds and delivering them to me when the thought ran through my head, "The shooting part was almost too easy" I have carried an O/U most of my life, usually a Citori. So to have that much firepower and to have been that efficient with a new semiautomatic was a little shocking. The gun carries like a dream. It weighs almost nothing and loaded with 1 1/8 oz of federal #6s through a modified choke it was deadly. I shot five for eight with it that day. Which is pretty darn good for me. If you have never taken a walk with one I highly recommend it. The new Browning A5 Sweet Sixteen is truly a sweet gun. I hunted with it four or five times before the season ended. I shot well on each of those hunts. Maybe it makes the shooting part a little too easy. I can't wait to hunt ducks with it next season! 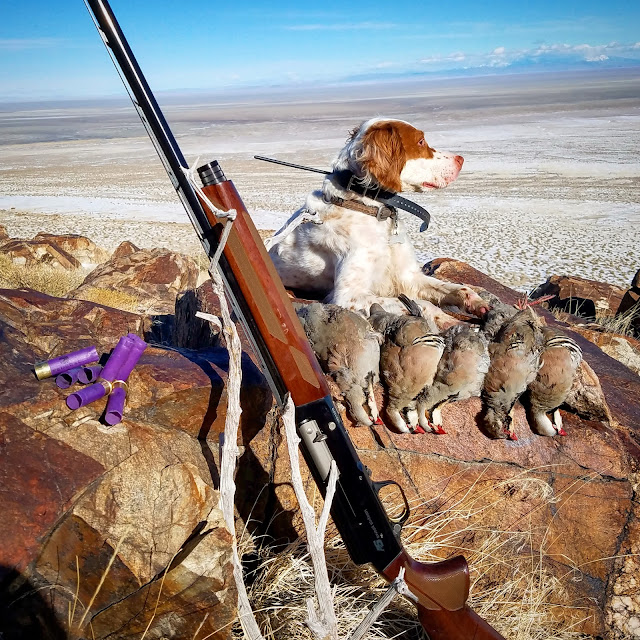 Posted by bquackn@gmail.com at 6:05 PM

Email ThisBlogThis!Share to TwitterShare to FacebookShare to Pinterest
Labels: PATIENCE WITH SNAPS