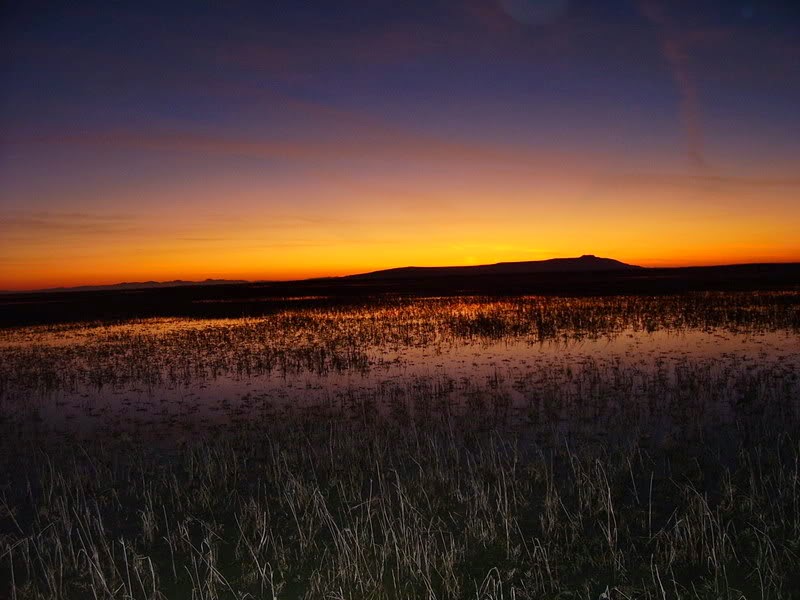 Staring west into the dimly lit orange, and pastel pink sunset we paused in silence and awe at the spectacle in front of us. It is an old scene. One unchanged in my lifetime yet it still takes my breath away. Glancing over at my partner I can see in his eyes that he is as bedazzled as I. It's interesting that with all of the technology available today there is still no way to capture the magic that happens shortly after sunset. You can take a picture or even a video of the intoxicating sights and sounds that take place but it is only a tiny piece that is captured. In reality it happens all around you. The silhouettes of mallards, and Canada geese with that brilliant light behind them that signals the end of the day. Wave after wave of them pitching in from up high with cupped wings cutting air like tiny jet airplanes filling the world with white noise that becomes the background to it all. In seemingly infinite numbers they look like black stars each of them growing bigger and bigger until their silhouette becomes clear before setting into their nightly resting place. The vocalizations from the geese, and the mallards each trying to out sing the other dominate the choir. The coyotes sing harmony with their sad song coming in from every direction. All of this in perfect choreography relentless and without break. Then like a faucet being turned off it stops with the blackness of the night. Only the occasional distant sound of a mallard hen reminding of what took place only minutes before.

It's Good Just To Get Out
JAN, 2013
As a young hunter I remember being confused listening older hunters talking about hunts they had considered successful. Often they didn’t shoot much and I sort of figured when they said things like, “It was good just to get out”, or “you don’t need to shoot a bunch of birds to have a good time” that was just an excuse for being bad at hunting. This crazy notion that you didn't need to shoot birds just didn’t make much sense to me because after all we are there in the pursuit of birds. The ultimate goal is of course to harvest some for the table, and harvesting those birds is what makes the hunt fun and offers the reward of satisfaction. So in bird hunting shooting a bunch of birds is the very definition of success. Right?
Thirty years later I am one of three friends sitting on the banks of an Idaho stream in mid January. Blissfully unplugged, unchained, and out of cell service for a time lapse series that will become the last day of duck season 2014.
The bitter temps at or near zero kept our toes and noses cold in the early hours. The only thing that resembled movement was each of us taking turns periodically to go on short walks to warm up a little. There was no action. It was a little boring and cold. Not many words were spoken, but even in such conditions each of us seamed content with the situation. Experience had taught us that often good things would happen if we waited patiently and put in our time.
When the sun finally peaked down into the canyon our spirits were lifted with it's warmth on our faces, and the Goldeneye that had started to whistle by from time to time. A few made the mistake of trying to make friends with our fakes, and though I chose not to shoot, it was fun watching the the other guys harvest a few.
After lunch a bald eagle soared down the the canyon gliding close over the top of our hide with the brilliant back drop that only Idaho can provide. The very symbol of our country, it made me think of how lucky I really am to have been born here. To be able to sit with two friends in the sunshine under a blue sky just doing what we love. It is a great thing.
A flock of rarely seen Trumpeter swans flew by. We marveled at their beauty and song.
We had many hours of pleasant conversation talking philosophy on everything from food and hunting to family and life in general. I think all hunters become philosophers after a time.
Late in the day a few mallards started moving. It was exciting to think we would finally get some action. When the ducks flared we noticed what we thought were two hunters walking toward us. As they got closer we could see they had no guns. We took pause as we realize one of them had a fishing rod, and appeared to be a pretty girl. You just don’t see that every day in a duck blind. She worked her way up stream as her boyfriend crossed to the other side. It became obvious he was working a trap line. She was so sneaky getting close enough to pull out her phone and take pictures of the birds sitting on the water. They did not frighten or fly away from her. She took several wonderful shots of our decoys. We got a really good laugh at her expense when we casually stood up and said hello. She was so embarrassed. She could do nothing but laugh with us. We were entertained enough that it wasn’t a big deal that there were for the first time all day mallards in the air and we could do nothing about it. I don’t think she really knew what to do so she just stood there twenty yards outside our spread for what to us seamed like the longest time. After a while the boyfriend crossed back over and they wandered off the direction they came from.
At sunset it was getting cold fast so we picked up and got back to the truck as quickly as possible. The young couple we had seen earlier stopped by as we were loading to apologized for messing up our hunt. We had another good laugh about it all. She was really a good sport about the whole thing.


We were getting really hungry so we got back in the truck and headed in to town for some dinner. Entering the restaurant a young man who had noticed how we were dressed said “Did you have a good hunt?”. I didn't know what to say. As my friend answered I laughed to myself thinking I guess it really was good just to get out.


The First Time
Jan, 2014
Aside from ducks quacking in the distance, my paddle dipping in the water was the only sound. The moon was so big it seemed like something out of a cartoon. I remember thinking, so this is what they mean by a harvest moon. It was all I had to light my way and it was plenty bright. I had left my light in the truck. I knew I would not need it. I knew I would not see anyone else. My young dog that I called Bo was my only companion. Like usual he was standing up with his front paws on the bow of my two seat canoe style kayak and was making sure I was taking us to the right place. The small boat cut the shallow water in silence. I was overwhelmed by the feeling that I was meant to be here, meant to see this, to feel this, to be this, and right now. I thought of my duck hunter grandfather that I was never able to share a blind with before he died. I wondered if he had ever experienced the emotion that I was feeling. I jumped out as my boat slid into the alkali bulrush on the edge of a pond somewhere in the middle of Harold S. Crane WMA., and went to work quickly setting my 80 or so decoys leaving a hole in the middle. I had read somewhere that this was the way to get them to set where you wanted them to. I had never seen anyone use a spread this big so I figured I was really outdoing everyone. Lol I set Bo in the weeds where he was well hidden, smeared mud on my face, and was content to sit and watch the world wake up around me. As expected we were the only ones in the marsh. I watched wave after wave of Mallards, Gadwal and Pintail get up and fly to the north. I had no idea why at the time. I wouldn’t figure all that out until much later. I tried calling a little but nothing would respond. I soon got frustrated and sat silent as they flew over out of gun range. At around 9:30 I hadn’t fired a shot, and with nothing flying I was tempted to leave. After waffling back and forth for a while I thought about how much work it would be to pick up and paddle out. I finally decided to make a day of it, and so we sat, and sat. At around 11:30 a single drake Mallard appeared from no where and was checking us out. Trying to stay as still as possible I gave a timid faint quack on my duck call. To my surprise he changed direction.. I could feel the excitement fill my body and had to concentrate to try and calm myself. He flew past us and I gave a faint 'quack quack quack quack' greeting thing that I had practiced on my Lohman Bill Harper Pro-Model duck call until ill. I couldn’t believe he bought it, banked right into the hole I had left in the middle of my spread. In excitement I stood up too early and fired both barrels of my O/U somewhere in his general direction only managing to scare him away. I yelled something at the top of my lungs, then sat down feeling ill. I had not even thought of what I would do if it had worked. Lol. That was the first duck I had ever called in, and I had missed him, choked and blew it. Fortunately, my shame and anguish would be short lived. I would kill my four (4) duck limit that day with ducks I had beat with the call. A hen and two (2) drake Mallards and one (1) Gadwal if memory serves. Life has never been the same. I was hooked on working ducks with the call. That has been the only way I have wanted to hunt ducks since.

In another time it was a different game altogether. I didn’t know what the term pro-staff meant, some still don’t. I had no clue about mud motors, air boats, motion decoys, spinners or even all the camo patterns we have today. I’m not sure they were even invented at that time. I was just learning to decoy ducks and had been working my tail off to learn how to call a little bit. I had no real teacher,I didn’t know anyone that could call, but I guess a cassette tape was a decent surrogate. There was no internet, I think I had seen a computer or two but couldn’t even imagine that one could be of any use whatsoever. I had been brought up with the philosophy that duck calls were only good for scaring ducks. I believed this until I watched a guy work birds into gun range on a “blue bird” day the year before. We were also of the theory that very few ducks were killed on “blue bird” days at that time. Lol. That man, who I have never met and who doesn’t know me lit a flame in me that would grow into the raging fire of obsession. He changed my world.

I often find myself longing for that simpler time.