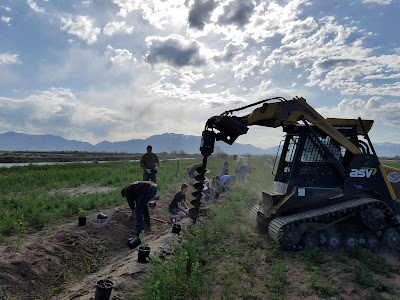 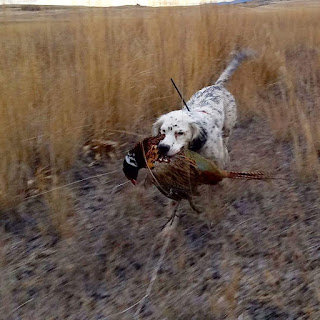 On public land in Utah, I hustled trying to get closer to the visible white setter tail that I could see standing over the yellow grass one hundred yards in front of me. “Tic really has this one nailed for sure!” I thought as I got closer. Sure enough, Tic was standing confident and true as I approached. His tail was straight in the air, his nostrils flaring as they inhaled the intoxicating scent. He was frozen in time as I tried to match my intensity to his. With each step, the anticipation grew causing my hands to grip my gun tighter. Tic has done his part for me. Now it was time for me to do mine for him. Suddenly, a rooster pheasant exploded from the cover cackling like an old witch as it attempted to put distance between us. My trusty old Browning flew to my shoulder and tracked the escaping bird. Just as my bead passed the old bird’s beak I let a load of # 3 steel go from the bottom barrel and with a puff of feathers the cock crashed to the ground. At the report of the gun, another bird flushed. This rooster was even bigger than the first. Again I tracked the bird before letting go of the second barrel. He too crashed to the ground. Birds were still jumping and flying away in every direction as I yelled, “Fetch!”. Just as Tic was about to deliver the first bird to hand I woke from my daydream with Utah DWR’s Rich Hansen standing in front of me explaining the plan for the habitat project that he had planned for that day on Ogden Bay Waterfowl Management area in Northern Utah. Dang it! It was only a dream but for the first time
in a very long time, I felt like it might actually come true. 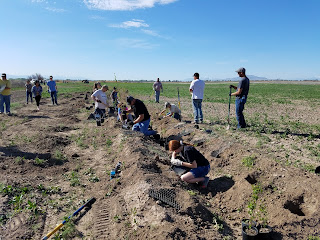 I looked at the faces that made up the small group that had gathered around Rich to take in his instructions. I saw friends that I had known for years along with men, women, and children that I had never met before. There were people from a variety of conservation groups, dedicated hunters, and some people just trying to make a difference on their own, all cooperating toward the common goal of bettering our public lands for wildlife. Volunteer hours matched with funds obtained through the Pitman-Robertson act allowed us to plant around 1500 trees and shrubs that day that will offer a multitude of benefits to wintering pheasants, quail, and other wildlife.
(In 1937, the Federal Aid in Wildlife Restoration Act, also known as the Pittman-Robertson Act, authorized that excise tax revenue from the sale of firearms and ammunition products be apportioned to State Fish and Game Agencies on a variety of projects related to wildlife, conservation efforts and shooting programs. I have always wondered where that money went and now I know.)

This was just one such project. The week before volunteers from the Great Salt Lake Chapter of Pheasants Forever planted nearly 500 bushes and trees out west of Kaysville, Utah all on public lands. I am hearing of similar projects happening in several other areas of the state also. 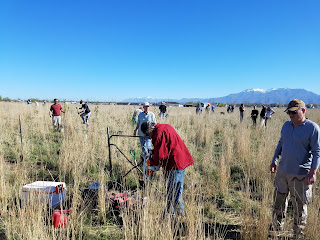 It is wonderful to see so many folks coming together to work on habitat for wildlife. It is especially heartwarming to me when it happens for the benefit of upland game birds. Pheasant hunting is still very popular here in the great state of Utah. Sadly, habitat has been continually gobbled up by suburban development to satisfy our state’s insatiable need for economic and population growth resulting in declining pheasant populations and hunter opportunity for about as long as anyone can remember. I believe pheasant hunting to be very valuable as not only a fun recreational activity but as a gateway to the many other bird hunting opportunities that our state has to offer.

These projects have their critics and not everyone loves the pheasant like I do. I don’t think anyone thinks these projects are going to make Utah the next South Dakota. We acknowledge that we are never going to be a great pheasant state and our backs are against the wall in many ways. However, I for one know that we can do a better job to maximize the pheasant populations in today’s available habitat. I think these projects go some distance to at least begin to recognize that.

Tic and I may never experience the fruition of these projects in the way that the first paragraph of this article is written but wouldn’t it be wonderful if the children who are working as volunteers on these projects could. I want them to have that experience. I think we owe it to them and ourselves to try.

Posted by bquackn@gmail.com at 5:42 PM