The Excitement, The Anticipation, And The Puppy 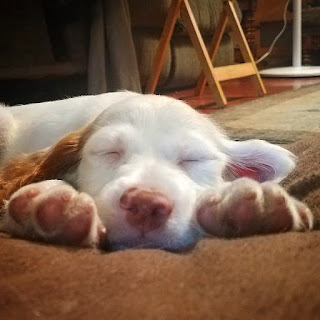 The wait was finally over! I was in a pickup driving north to meet my new puppy. Yes, mine. I felt a little like the little boy in The Biscuit Eater when Mr. Ames gave him the runt of the litter for his very own. If you haven’t seen this 1939 movie show, you should. I was more excited than a middle-aged man should be. It had been a long road. There was a planned litter that was absorbed, a flood, and an exhausting search that occupied my mind for weeks, but finally, of all the available English setter puppies in the world, I had made my choice. After making my decision, I had to wait through three of the longest weeks imaginable for him to get old enough to come home. Finally, he was of age.

The three-hour drive seemingly lasted for days as the truck crept up the freeway like it was in a school zone. The speedometer said 80 MPH, but it felt like 15. Eventually, we ended up in the town of Pocatello, Idaho where we were to intercept a truck that had come from Montana on its way to Boise carrying the cargo that I was waiting for. It took forever to get there, but somehow we were two hours early. UGH!

We had to eat, so we killed a week or two at this Mexican place as a little over an hour passed. Then we walked through the Chubbuck mall for a few minutes. I hate malls. I bought pants. Finally, my phone rang. It was the guy in the truck. He said we were to meet him at Walmart. I just realized my pup came from Walmart, but I digress. It was exciting, and it felt a little like we were meeting the secret underground puppy cartel in a shady parking lot on the bad side of Pocatello. If there is such a thing as the bad side of Pocatello.

The guy in the truck opened the crate to show us the goods. I looked in there carefully. Always inspect the goods. What I saw was four of the tiniest little setter eyes staring back at me. We were to pick up a pup for a friend also. The puppies were so small. I didn't remember them being so little. 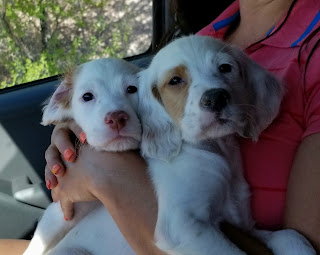 Angie was instantly in love. So we piled back in the truck, her with not one but two bundles of energy on her lap. The crate was in the back seat, empty. The drive home went by quickly, and our friend Todd was waiting at the house to pick up his wife's pup. In a few minutes, we were in the house at home with our new puppy that I had named Snaps on the way home.

I was tired. After all, that day had lasted several weeks. We elected to stay up for a little while and play with the pup. After a time he appeared tired, so we let him outside, put him in his crate for the night and went to bed.

My heavy head hit the pillow, and my bed was more comfortable than ever. I 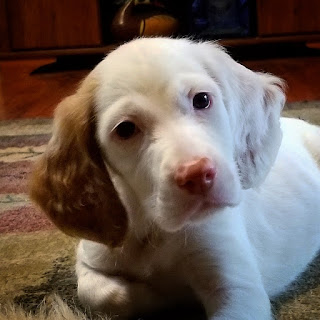 only had a few hours before I had to get up for work, but they would be good hours. Wrong! Just as my eyes closed, they were opened again by a screaming demon from hell that had apparently broken into the room where we had left our puppy. I rushed in to combat the evil beast before he did something to junior, but there was nothing there but cute little Snaps looking at me quietly with a very sad “let me out?” look in his eyes.

“I am not going to let you out,” I said knowing that I had to stand my ground and I returned to my bed. The silence was so sweet, but no sooner did my head hit the pillow and the demon spawn had risen again in the other room. It was screeching and screaming noises from another dimension that I couldn't remember hearing before. I looked at Angie,” It will only be a few nights. If I remember correctly, Sunnie was only like this for a week or so, and she was way worse than Tic.” I said. She agreed.

By day seven I was convinced I had invited some sort of sleep preventing daemon into our home. Somehow his level of screams and tones had increased in volume and variety. He was actually getting better at preventing us from sleeping. My eyes were bloodshot, and I had dark circles under them. Angie looked beautiful as usual. (I know to avoid digging holes, and she is in the other room cooking our dinner as I write this.) 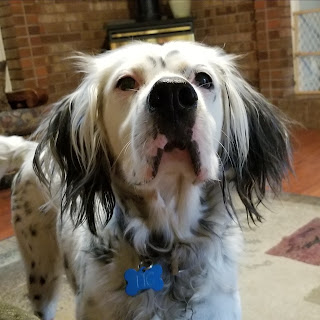 I did catch 15 minutes of sleep right after work one day only to wake up to Snaps chewing on my slipper. I loved those slippers. In my red-eyed sleep-deprived state, all I could think about was how badly I had wanted this puppy and how excited I was to bring him home. This cute evil being that had taken over the house. Tic was eyeballing me constantly, Sunnie was looking at me as if I had destroyed her home, and Angie was patient after all Snaps was cute. 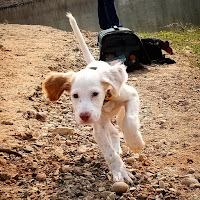 Then I was sitting on the couch, and I had lost track of where he was. I yelled, "Snaps. here!" He rounded the corner going full speed and tumbled three times. The enthusiasm in his eyes made me laugh as he came to his feet running straight for me. He hit the couch and somehow made it up onto my lap. He dug his puppy soft face into my neck and held still while I could hear him breathe and smell his slightly skunky breath. 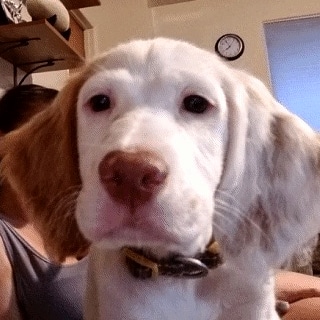 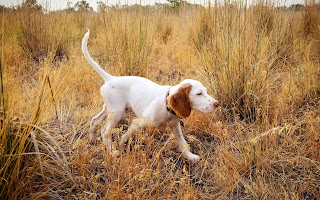 Posted by bquackn@gmail.com at 1:55 PM