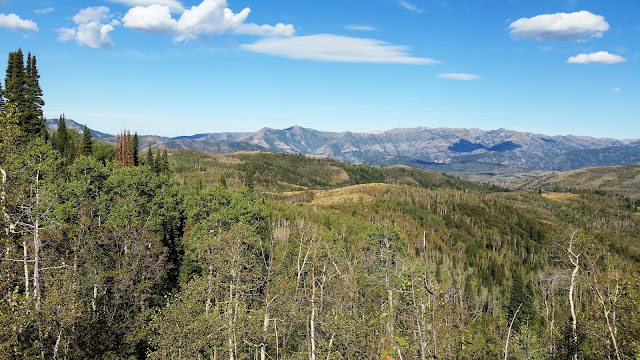 Driving in the darkness the eastern sky opened up to pastel blue and the silhouette of the Wasatch mountains were exposed. Old Hank was moaning the blues on the radio, Tic was in a crate in the back of the truck and I was full of anticipation for the first weekend of the 2015 bird season. Ruffed grouse would be the our target species in the morning and I had been hearing rumors of bountiful hatches. Driving through my old haunts I couldn’t help being reminded of long gone experiences that are only in my memories and in the spirits of old dogs that have long since left us. It was good to be be alone and think of the past. I smiled as I thought, you know Tic and I share a few experiences now too. By the time we arrived at one of my favorite early season canyons it was just light enough to see clearly. It was to be a dry, hot and dusty Utah day in September so we wanted to get our dog work in early. Tic is now 6 years old, but you would think it was his first bird season when I let him out of the truck. He was fired up like a six month old puppy on bird scent. I was so amused by his enthusiasm I couldn't keep the grin from my face as we started into the canyon that has been so good to me for such a long time. 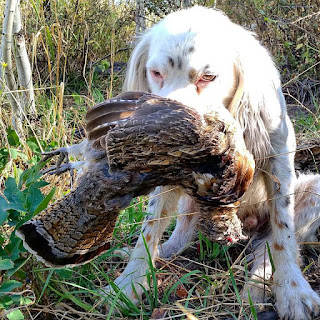 We were about 10 minutes into our hike when a bird flushed at my feet while Tic was exploring a likely spot out to my left. I snapped a shot at the bird as it disappeared behind a pine. Tic now a seasoned old veteran bird dog came running to my aid. Bless is heart for assuming that I had connected. I gave the dead command not knowing if I had a bird down or not. Tic slammed into a half point and then scooped up the dying bird and brought it to hand as he has so many times by now. I am proud of the dog he has grown into I thought. I thought that finding a bird so early was a good sign so we walked on with enthusiasm and Tic settled into his typical hunting gate. Six hours later a now very tired and hot Tic would stop to flush as another bird flushed. I couldn’t see it clearly but I went over in that direction to investigate as Tic stood. As I got to the spot of the flush another bird got up and I could see this one clearly as it gave me a rare 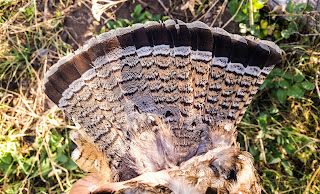 dream of a shot. A grouse flying straight away through a clearing is indeed rare and this one would find out why as it tumbled to the ground a victim of my first barrel. Tic retrieved and that was to be our only grouse action for the day.


We would head back to the truck with the temps getting into the upper 80s I was no longer enjoying
my walk and dog work was not to be had Tic was working but his tongue was hanging pretty good. It was not the epic morning of young dumb brood flushes we were expecting but it was just fine for a start, and It did provide a delicious dinner for us later that evening. I have been very tired of flavorless store bought chicken breast.


We drove off to a favorite water hole for afternoon doves and that was to be much better. It was a classic decoy shoot and was just a lot of fun. Tic enjoyed cooling off in the water and retrieved my birds for me. I shot fairly well and we were able to take our share. What a fun little bird Mourning doves are, and they really were the cap on a wonderful day alone with the dog. Tic and I love to be alone like that once in a while. Its going to be a great year! 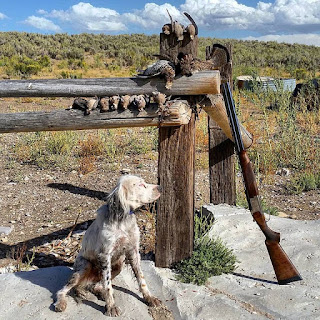 Posted by bquackn@gmail.com at 8:11 PM