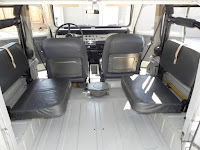 rides in the back of dad’s 1973 Toyota Landcruiser sitting on one of those sideways seats that I thought were so cool. It was always in a long brown case on the other side. There would be a German Short Haired Pointer, and sometimes two riding with me. The dogs lived outside in a kennel so if they were ever bathed I don’t remember it. They smelled Terrible and after riding with them so did I, but that smell became one I associated with adventures in the field with my father. The journeys were always so different than my everyday life of school, and sports. We would often pick up one of my dad’s friends to go with us. They always had cool nicknames like Swanie, or Oly, and I would listen to them exchange hunting stories in the front seat while I did my job of keeping the dogs company. I wondered if I would ever have that many stories to tell.


Eventually we would arrive at our destination, and go for long walks in the grass and weeds while we watched the dogs run. It wasn’t entirely a pleasant experience for me. I had the gear of a child, and

there were times when I would fall down or struggle to keep my little legs moving long enough and fast enough to keep up. When it was too much for me I would spend part of the day riding on my dad’s shoulders. I always had June-grass in my socks, and one of the larger male dogs once mistook me for a fire hydrant while we rested and peed on my shoulder soaking me to the core. I cried. Even with all of that, I liked being one of the guys and whenever I looked up at my father that gun was always in his hands. My dad’s gun was cooler than a lot of his friend’s guns. He shot what I called at the time a double barreled shotgun, and to me it was better than the single barrel guns carried by his friends. After all it had two barrels those guns had only one.

It was on one such journey that I saw a dog point for the first time. Dad leaned down and whispered, “Look Bret Duke is on point. See how still he is… Like a statue… He has a bird right there.” He had told me about this quite often. Now seeing it with my own eyes, I guess I expected something else. I thought the dog should hold out a paw and point to where the bird was or something because I could see no bird, and to me pointing was done with a finger. Seeing that dog stand motionless on that ditch bank in the yellow grass with the Russian olive trees behind it was sort of underwhelming to me at first. Duke stood there for a really long time while dad stomped around in the tall thick grass and I started to doubt the dog had a bird at all. I certainly couldn’t see it. It all changed when dad's boot finally disturbed that cackling old rooster pheasant as he finally broke from his hide with those loud thunderous wings making an attempt to escape. It startled me so badly I almost cried. I looked up at my father for confidence, but he was focused elsewhere. Dad had already drawn that cool double barreled shotgun to his shoulder like a cowboy with a six shooter in an old western ready to take down an outlaw. A second or two later while I watched him and the bird at the same time a single loud bang caused me to flinch and brought that bird back to the ground. My father was suddenly excited and yelling “Fetch it here Duke”, and before I knew it the returning dog parted the grass and delivered the bird to dad’s hand. That’s when I understood the magic of the hunt. I had seen the point, the flush, and the retrieve. My father bent down to give me a closer look at the magnificent bird in his hand and I was hooked for life. There could never be anything that compared to the excitement of that experience.

As is normal with each year I got a little older, a little bigger, and the dogs seemed to get a little
smaller. My days of getting peed on by a big dog were over at least for now, and it wasn’t long before 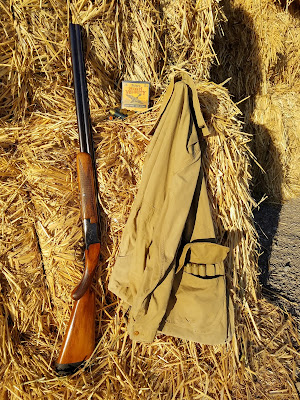 I was carrying a gun of my own on those adventures with my father. My gun was inferior to my dad’s though. Not only was it not as efficient at killing roosters, but unlike his mine only had the one barrel. I loved the adventures even more now that I was a more active participant. In the field my eyes always wandered to dad’s gun. I can still see it resting against a fence post as we took a break or broken over his shoulder while he walked. I had by now learned that it was not just an ordinary double barreled shotgun it was a 1953 Browning Superposed.

Later when I first entered the work force and had an income of my own I started visiting sporting goods stores admiring the Browning Citori shotguns that they had on display wondering if I would ever have the $1000 it would take to have a gun with the two barrels that the child within me had always dreamed of. The company that I worked for was doing very well at the time, and management happily shared the profits with the employees in several ways including a cash bonus at the end of the year. The first full bonus I received was, you guessed it $1000. I went straight to the bank to cash that check and then broke the speed limit getting to Sportsman’s Warehouse. I made the poor guy at the counter pull every Citori they had in stock out of the back so I could pick out the prettiest one. That day I left the store after dropping $1034.96 with my first “Double Barreled shotgun” like dad’s.

As an adult I guess I took bird hunting and bird dogs far beyond anything my father ever imagined. I got into blowing Duck calls in competitions and running bird dogs in trials.  We still had our adventures in the fall but not as often. He eventually had an accident with a horse that took off the top half of the thumb on his right hand. He could no longer work the thumb safety on the old browning, and was forced to leave it home in favor of one of those single barreled guns with a safety behind the trigger. Now my gun had two barrels and his only one. Mine was also as efficient at killing roosters as his was now and I’m certain it had everything to do with the number of barrels on my gun. I sure missed seeing that old gun every fall. 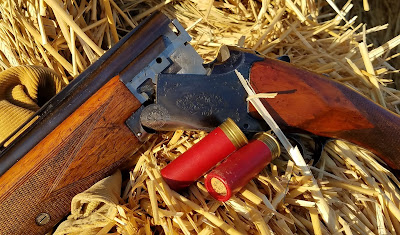 Recently with me in my late 40’s and dad is closing in on 70 he drove out to visit me. We went to lunch and to the John M. Browning and that is just a few miles from my house in . Later at my house after spending the day together dad told me that he was getting older and with his missing half thumb he could no longer use that old Browning Superposed and that from here on out it would be mine. Truth be told, I’ve become a pretty emotional and sentimental man as I’ve gotten older. When he pulled that old double barreled shotgun out of the case 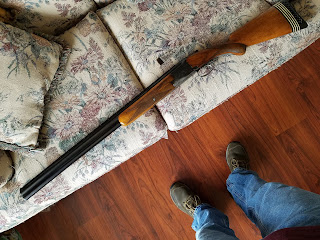 and I saw it for the first time in at least fifteen years I felt like that small boy again standing on a ditch bank next to that German shorthair watching my dad shoot a rooster. The childhood hunting memories had clouded some but they shot through me one after another until I was overcome with emotion that I didn’t want dad to see. I quickly went into the other room “to get a rag to wipe it down”, but it was really to gather myself. I was somehow able to get it together by the time I returned. We looked it over together. The gun had aged some and now had a few problems. The stock was partially broken at the wrist. Dad was the second owner and the lady that owned it before him had cut the stock short to fit her. A gunsmith had added spacers so dad could shoot it, but it was still too short for me. The biggest problem in my eyes was the small bulge near the end of the bottom barrel. 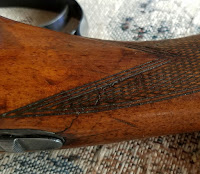 Some of my friends said I should put it up and save it as a keep-sake. The more I tried the more I just couldn’t come around to that way of thinking. The gun had walked too many miles with my father for too many years. This gun was not a gun to be retired. This gun was and should again be a rooster killer. I had to try to get it back in the field. After talking to several experts on gun restoration as well as experts on Browning Superposed shotguns I learned about my options and what they would cost me. It could have been really expensive. I lucked out and found a used stock that came off of a 1951 Superposed of the same model. That saved me a lot of money. I then sent the gun to a great guy in who went through it, fitted the new-used stock and fixed the bulging barrel. The gun came back to me tight and ready to shoot. In the tradition of my father it will again be put to life as the fine tool John Mosses and Val Browning designed it to be.


This year when autumn is upon me and I slide in on a high tailed point offered to me by one of my beloved bird dogs I will be holding that old double barreled shotgun in my hands. I just hope I can make it look as cool as dad did. 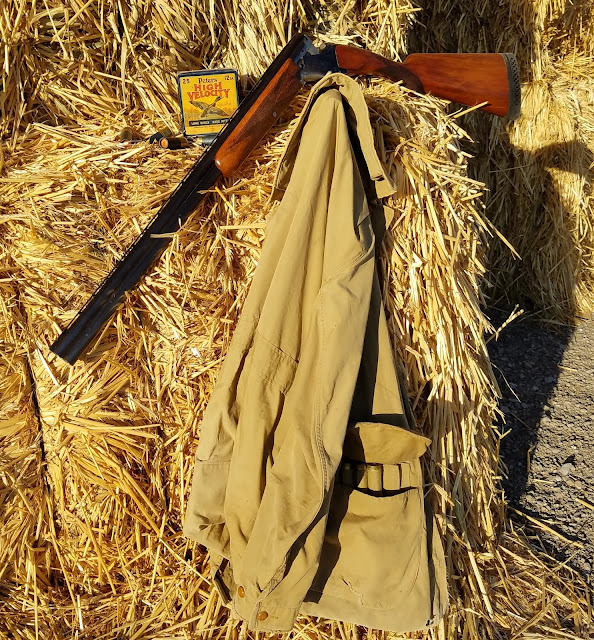