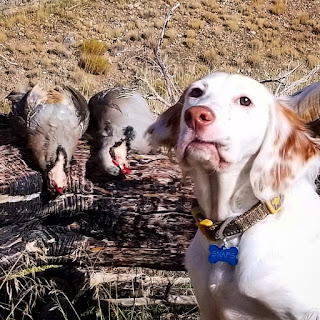 It was just time. Snaps had just turned five months old. I wanted to put him on wild chukar, and it just so happened that I had a day to do it.  I made the drive to the desert with only him crated in the back. Sunnie and Tic would have to sit this one out, and they were not happy about it. No matter, it was a day for Snaps. He had been on a dozen or so pen raised chukar and had pointed wild Ruffed grouse, Sharptail Grouse, Huns, and a couple wild hen pheasants previously so I was reasonably confident if I got him around birds nature would take over.

When I finally parked the truck and dropped the tailgate Snaps was wound up tight. He was running all around and clowning about like usual. I laughed as I thought, “Boy, any chukar that dies today because of this clown is a shame to his covey.” Grinning, I put two purple shells in my Citori and started up the hill with more questions in my mind than anything else.

At first, Snaps seemed to enjoy this new playground of thin grass, steep hills, and rocks to play on. He was running bigger than usual and to my surprise pushed out to about 150 yards. Until then he 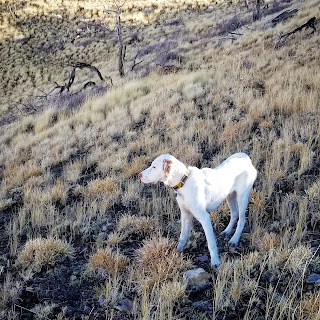 had not shown enough confidence to get that far away from me. I was pleased with this new run. After about a half hour he stopped on the hill as if to look it over. I think he might have thought, “What's this strange place the boss has taken me to now?” He calls me the boss. Angie doesn't need to know. After a moment to ponder things he burst into his usual run of 45 yards to the left and 45 yards to the right. For now, I will take this. I know the wheels will come later.

He had made a little cast off to my right and disappeared behind the curvature of the hill. The next time I saw him, he looked serious and appeared ready to fight something. He was walking on a frozen rope straight into the wind. His nose was high in the air, and the hair on the back of his neck was sticking straight up as if the scent of something inherently evil was on the 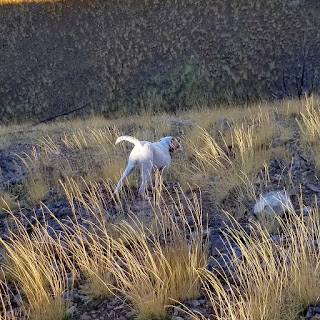 wind. His eyes were intensely focused and huge. He continued moving over the crest of the hill, ran 30 yards or so, and hit point. He was not in a perfect pose. He actually looked a little nervous as I walked a big arc around him and moved down below. It was indeed the scent of something evil, and two chukars flushed out of range. Snaps took a dozen steps and pointed again. I took a step and ten or more flushed from below him. I picked one out swung the gun and dropped it. Little Snaps chased it down the hill and pounced on it only to lose footing in the steep terrain and tumble passed the bird. He came to his feet looking a little surprised by his fall, but the young fella quickly recovered and began plucking feathers from the body of the expired chukar. I yelled, “fetch!” He looked up at me defiantly with a mouth full of feathers. “Fetch!” I screamed again. He eventually picked 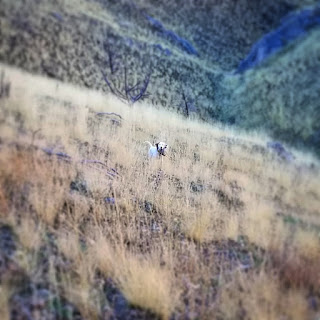 it up and carried it halfway back before he got bored with it and left it to begin looking for that evil scent again.

“I'll take that too,” I thought as I stumbled down the hill to pick up the bird. I pocketed my first chukar of the season, and we were back to the search. We side-hilled and stumbled for another 30 minutes until my puppy started acting excited. He searched and searched but could not find the birds. They flushed 50 yards above us. I was able to see where they went and came up with a plan to get on top of them. In 15 or 20 minutes we were dropping down the hill where I had watched the covey land. The wind was coming up the mountain nicely, and Snaps soon found scent. He pointed and then moved forward, and all the birds flushed. I had to let them fly away, and this time I couldn’t see where they went. It didn’t matter, this is what I had signed up for, and I was enjoying watching the little guy learn. The question on my mind was, would he learn from it.

As we continued our hike. I was thinking of my favorite chukar dog, Sunnie, and how much ground she covers as I watched this little guy cover what he could. I could also see he was starting to get tired. I was about to turn around and start back when he suddenly got birdie again. He was hesitant this time to go into that scent. I'm not sure why exactly, but when I started to move in his direction of interest all fear was lost. He ran down the hill until he pointed awkwardly. This time he did not move anything but his eyes. My heart raced with excitement as I moved out in front. The covey exploded. About twenty birds flushed. I picked the easiest shot and pulled the trigger. Then ten more flushed. Then three went, followed by a pair, and then one final late flusher. Snaps was caught up in the excitement and did not even notice that one bird had fallen at my shot. I called him back after he settled down and gave him the dead bird command. He searched as we had practiced and quickly recovered my injured bird. To my surprise, he retrieved to hand like he had been doing it forever. “That went well.” I couldn’t have been more pleased. He had done really well there. I elected to turn around and head back to the truck on that positive note. 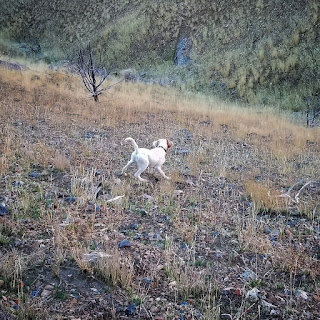 out from under him.

Snaps got to have his first “burned cedar” picture taken when we got back to the truck. Someday soon there will be a five-bird limit on the tree next to him. He grew a little today. I could watch his understanding of what we were doing improve right before my eyes. For those wondering I elected to shoot only one bird at a time to prevent chaos and possible lost birds. He is still just a baby. I like to keep it simple when they are small. 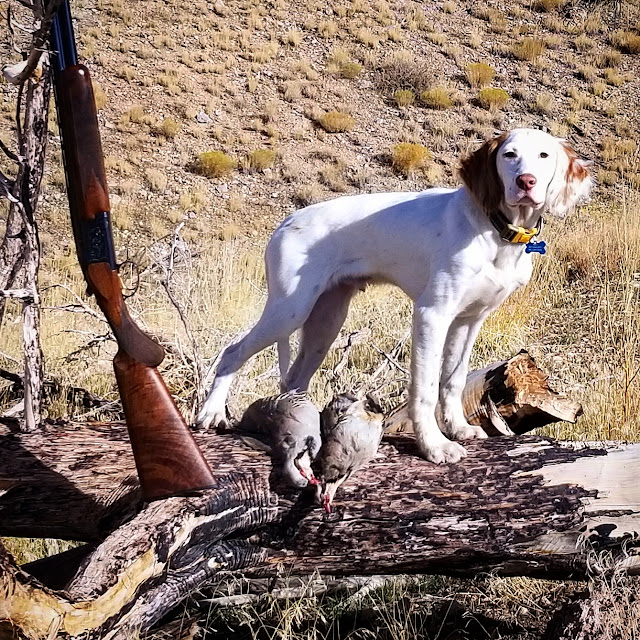 Posted by bquackn@gmail.com at 5:03 PM