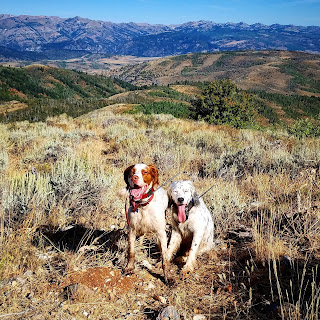 A little rain fell last night so I was feeling very hopeful while driving to one of my favorite early season grouse spots this morning. I had a brand new tracking collar that I was excited to try out. Its a sportdog Tek 2.0 and with a dog that runs like Sunnie I knew it would come in handy.

It was just before sunrise when I slipped two 1 1/8 oz number six's in the chambers of my 525 and we started up the hill. Sunnie and Tic were all wound up. It always makes me giggle when seasoned dogs get so excited about a new hunting season. I was excited to see my dogs now veteran dogs work together doing what they specialize in. I never get tired of watching a fine dog work scent and hit point. With a slight breeze in our face I was feeling really good about the possibility of getting some good dog work.
The first to show off some skills was now 7 year old Tic. He found a nice ruffed grouse tucked tight in some dead fall. I could barely see the tip of his tail through the heavy cover, but the tracker got me there. The bird shot like a rocket, barely visible flashing through the green leaves of the early September aspens. I swung quickly and shot as the bird disappeared behind a tree. I had to laugh while I thought to myself just because you get them pointed doesn’t mean you get a great opportunity. I did not connect and though I wanted the first bird in hand It was still fun to see Tic with a full tail of hair get the first point of the season. He has been so solid for me for a long time. He always give his all.

As we walked on up the canyon. I heard a hawk scream a couple times and then saw two blue grouse flush from up on the ridge and fly back over my head down toward where I parked the truck. I have to assume they were frightened by that hawk neither dog had gotten within 100 yards from where they flushed. I was deep in thought about this when a voice from my Tek 2.0 Said soonie is on point 110 yards to the south east. Soonie? I laughed the device always mispronounces Sunnie's name. I turned on my screen and followed it to her. When I got there I couldn’t see her at all but a big blue grouse flushed I tracked it and shot as the barely visible bird flashed through the trees, and again I only got one shot and did not connect. Sunnie came out of the brush looking at me as if to ask, well, where did it fall? She always has a way of making me feel bad for missing. “I'm sorry” I said out loud “No bird”. I'm glad dogs cant speak because she gave me the dirtiest look as she started about her business again.  Another hour would pass before I would hear “soonie is on point” again. This time she was 45 yards away but before I could get to her I heard a bird flush, but never saw it. When I got to her she was still standing but had lost style telling me that the bird had indeed flushed. I have to admit I was getting a little bummed by now. I was a little discouraged as I released her and we started on our way. It wouldn’t be long before Tic would slam point. That point where the dog is running full sped and all of the sudden spins and freezes all in one motion. "WOW! Nice work Tic I had better get a picture of that one." I thought. With camera in hand I tried to get a better angle and whoops..... There went the bird. I didn’t even get a shot. It was 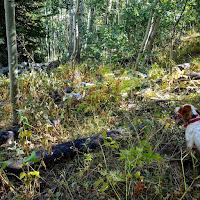 another ruffed grouse. A beautiful red phase bird. I wanted to hit myself with a stick. Now I was really down. “Get a better angle dummy! Maybe shoot the first bird of the year before you worry about stupid stuff like pictures.” “UGH!” What can you do? So I sent the dogs hunting and off we went. Fortunately Tic didn’t make me grumble and moan very long before he was standing over a nice blue grouse. This one would meet my determined side as he tried his escape flashing through the trees. For the third time I quickly tracked the bird and flashed a shot at the last second. This time I heard the bird crash through the underbrush. Tic brought the bird to hand. I was so happy to have been able to finally finish one. Sadly 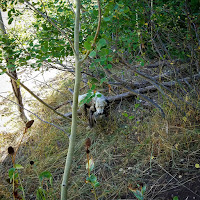 it was starting to get hot. Both dogs had the look of exhaustion on their faces so we hunted back to the truck not seeing anything on the way back.

It was still a fine day. The Sportdog Tek 2.0 proved to be a useful and effective tool. Even though I had only one bird in the bag I watched some brilliant dog work. Both Sunnie and Tic looked great. I cant wait to do it again in a couple of days!
I just have a feeling its going to be the best year yet!

Posted by bquackn@gmail.com at 4:30 PM