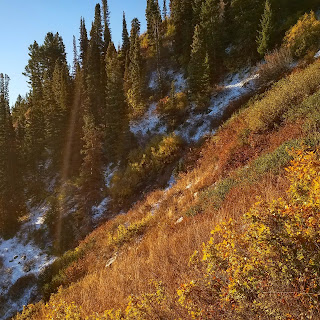 As Tic and I started our descent I could see there was a crust of snow in the shadows of the pines on the southeast side of My Hell Hole this morning. I had not been up there for several weeks so I was excited to see mother natures frosty October breath starting to take its toll. The aspen leaves were yellow and falling, and the under-brush was almost bare. One of the most valuable assets of this wonderful place is that dusky grouse seem to gather here as the season goes on. It just gets better and better with the declining weather. The only way in to this place is down and the only way out is up. It is like hunting chukar in thick brush. It is brutal, and I love this place.

Tic was running below me searching a group of pines just below the top when birds flushed all around him they rocketed down the canyon gaining speed with gravity's help. I was just out of range and chose not to take the chance of crippling one. Tic stopped to flush and as I walked in another dusky flushed and quickly put a pine tree between he and I to aid his escape. I chuckled a 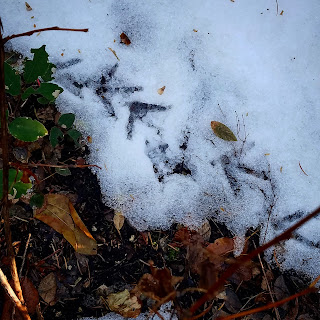 little as I thought about my old dog and I having been made fools by this first group of birds. Tic didn’t look as amused as I was and I think he was blaming me. Never the less when I released him he went right back to work. I wasn’t sure why he didn’t get them pointed but as I walked I began to realize the crusty snow was making our movements very loud. It might be a tough day. These late season birds are not the “fool hens” that my grandfather would talk about. They get up and get gone! We walked on and the crusty snow would make it tough to get close to anything telegraphing our location and path constantly. I heard several birds flushed far away from me and Tic we didn’t get within 60 yards of them. I was getting a little bit frustrated when my Sportdog Tek 2.0 tracker went off telling me that Tic was on point. I quickly started in his direction, but again birds started flushing before I 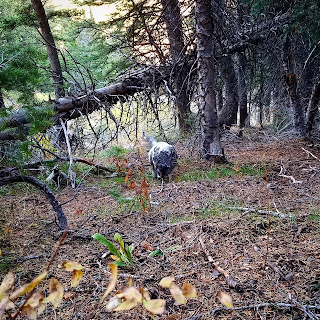 could get into sight of him. My luck would change this time however. Two birds flushed late as I got to Tic. I missed the first one but connected with the second and it tumbled down the steep hill with Tic in Pursuit. Tic was on the retrieve, and I was able to admire my old dog for just a moment as he struggled up the hill with the huge bird. That was just the medicine we needed. Both of us felt better with the little bit of success. The rest of our morning would be more of the same. We had points with birds flushing early and behind trees. We had wild flushing birds and even a nice point on a ruffed grouse that played his game rather than mine putting the only tree around between us. Sometimes things go perfectly and other times it seems impossible to get a shot. This was the latter. We would come home with only two birds, but I think it was the most fun we have had so far this season. There were lots and lots of smart grouse and it is fun to get worked by them every now and then. I learned through the years to respect the Duskys that live in My Hell Hole. Though they seem like fools at times if the cards are stacked in their favor it can be a very long day. What great birds! 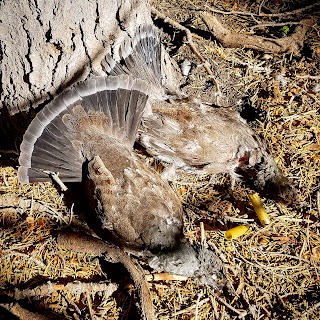 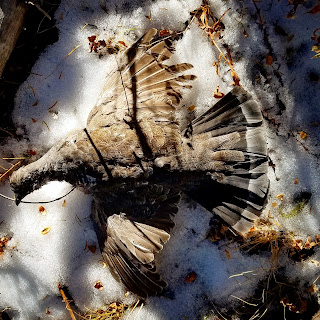 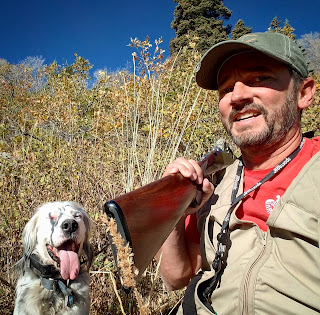 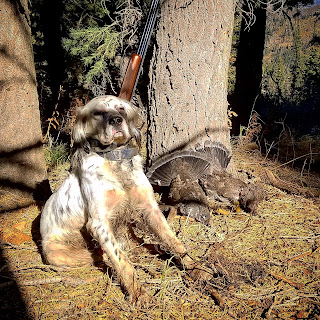 Posted by bquackn@gmail.com at 4:03 PM