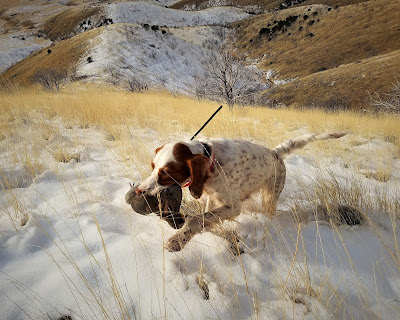 Driving out to the desert in the darkness the conversation was of all things bird dog. I had just returned from the National Bird Dog and Field Trial Museum in Grand Junction TN so I had plenty to say. Lol My good friend Cade Allen had brought along a 1 year old pup that he was excited to test on wild chukar this morning. Of course I was excited to put our four year old dog Sunnie back on chukar too. After months of grouse, pheasant, huns and every other game bird that westerners are blessed with I was excited to see her in the open country on her favorite game bird. She is probably at her best on chukar, and when she is really on there are fireworks in the chukar hills. I always wait until after Thanksgiving to start chasing chukar. In Utah we have so much time in the winter to pursue them, and so many other birds to hunt early that it seems natural to put it off until the other hunts slow down. So for me, the uplands in December and January are all about chukar. We drove to a spot I had hunted a couple times and prepared our dogs and gear.

Cade and I had never hunted chukar together so I think both of us were excited to share the day. I looked up at the mountain and humbly said “this looks steeper than where I was yesterday.” As always in Utah's Chukar land We started by gaining elevation. Before we had topped the first bluff my SportDOG Tek 2.0 was going off telling us Sunnie was on point up over the top. We broke ourselves trying to get to her. When we got there sweat was dripping down my neck, and she was standing tall and as pretty as I have ever seen her. 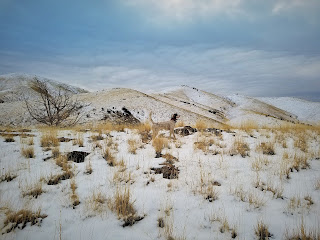 Annie, Cade's pup, went in and to our surprise backed Sunnie. The back was only temporary though. She being a puppy left her back and went on searching. Cade and I stomped around but couldn’t produce anything or even find tracks. I released Sunnie and she covered the hillside working the wind in the deliberate manner she always does until....Boom! She hit point again 40 yards to our right. Annie again backed for a few seconds and then broke only this time she ran straight into the wind and pointed. Sunnie did as she should and held her point. We walked out in front of Annie and sure 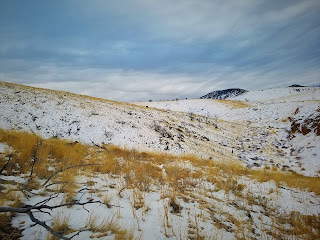 enough a small group of chukar escaped to the west while we filled the air with our shot patterns. Cade and I looked at each other in disgust. He said “I didn’t see anything fall. Did You?” I said “no, we suck.” We chatted for a minute about how bad our shooting was and how many birds we should have. You cant help but laugh. We talked about what we thought just happened with Sunnie and the puppy and everything that just went on. With the wind blowing up the hill I'm certain Sunnie winded those birds from way up high. She was blessed with a better nose than most, and we have been blessed with her. Spend enough time with her you will see something incredible.

Cade and I decided to split up and take separate ridges up in order to give our dogs a chance to work independently. I sent Sunnie up the hill to the left and he sent Annie up to the right. We would meet at the top.

Its no secret I like to be alone in the field. Everything becomes my observation of it and the world can really be seen in its clear nakedness without the concerns that fog my mind when hunting with a partner. As we separated I started to really see the hill for the first time today. The dog floating effortlessly up, down, and sideways working the wind as it swirls up the canyons. I could see the expression of true bliss on her face as she did what she was born to do. She knows this is her purpose. I could feel the wind on my face nipping my ears. It almost hurt. The small rocks on the partially frozen nearly vertical ground slipping beneath my boots making every step difficult yet adding to the experience of the mountain. I noticed there were lots of little tracks in the snow. “Hey! Those are chukar tracks dummy!” My inner voice shouted waking me from my moment of clarity. The only bad thing is that they were going straight up the hill. Sometimes I hate chukars. Sunnie had slipped out of sight while I was daydreaming and I was just thinking of checking my Tracker when it vibrated. I looked at it and sure enough It was showing the stop sign indicating that she was on point. I decided to try shooting a video while I followed the tracker to the standing dog. Its my first attempt. I’m glad I shoot a gun a little better than a video camera. lol So you can watch this and we can pick up at its conclusion.

There were probably 8 or 10 birds in that covey. I was feeling pretty proud of myself for getting a double on the covey rise and had forgotten all about the poor shooting 45 minutes earlier. I went on my way but didn't see any more birds until after Cade and I met up.

At the top, Cade came stumbling across the snow covered loose rock and we talked about our time apart. He had managed to get a single pointed and shot. It was nice that we both had dog work, and got birds. I explained to him the route I thought we should take he agreed and we worked our way along the highest ridge toward the long south facing slope that we had planned to hunt down. Sunnie dropped off the back side and started working an open hillside that she liked. She was 250 yards down the steep hill. I told Cade there is almost never birds on that face. I whistled for her to check back but she blew me off and kept hunting. I gave her stimulation from the collar and she still ignored me. If she blows off the collar there is a reason. “I don’t want to go clear down there.” I said Complaining. Cade didn’t want to either, it almost was straight down. Cade laughed and said “well there it is.” as she locked up and pointed. I Grumbled a bit and said “are you coming with me?” Cade foolishly agreed to come along and we started half sliding half walking down the hill. I grumbled the 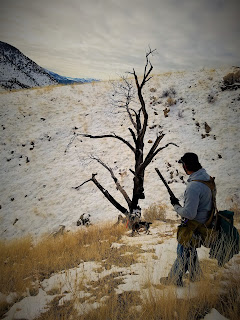 whole way down about how much I hated chukars and everything about them. I kept saying this better not be a false point. By the time we got down there the birds had moved on her and for a few seconds we thought we had walked all the way down there for nothing. I relocated Sunnie, and as I did Annie pointed. Sunnie not seeing Annie on point found scent and pointed on the other side of the small gulley and we were in business. The cheat grass erupted with about 15 birds flushing. Cade and I somehow managed to shoot the same bird.... twice. No matter how much you talk about shooting your lanes sometimes this just happens. We got two out of it, twice. We each took one and were happy even though we could have done better. We would now have to walk clear back up to the top. We had lost almost all of our gained elevation. Somehow the climb didn’t seem so bad as we had good dog work and a nice covey flush at the bottom. I still hate chukars though.

We got to the top fatigued and breathing heavy. I said “we sure are stupid.” I say that at some point about just about every time I hunt these evil little birds. We paused for a minute to catch our breath and then started our decent. We were finally hunting the south face that we had planned to hunt all along. It wouldn’t take long to find birds either. Sunnie ran straight down and I lost her over a rise a minute later the tracker was going off . She was 324 yards down hill on point. We started to her when Cades tracker went off with Annie on point at 54 yards so we went to Annie first. Two birds flushed , and Cade connected on one. I didn’t have a shot. Quickly, I hurried toward Sunnie, who was still on point 300 yards away while Cade looked for his bird. I got within sight at 200 yards from her when the birds got fidgety and flushed. Sometimes they just don’t wait. Fortunately I saw where they went and we got them pointed again. We had several other pieces of dog work and by the time we were taking pictures we were talking about how promising Annie looked and how good Sunnie had been.
Chukar are an amazing game bird. They live in the most challenging terrain. They hold wonderfully for a pointing dog, and because it is such open and elevated country where they live the images are breathtaking. The dogs love them even though they are always bloody by the end of the day from the brutally steep and abrasive terrain. Every time I hunt them it is an amazing day of experiences and challenges.


Thanks for the wonderful day, Cade!