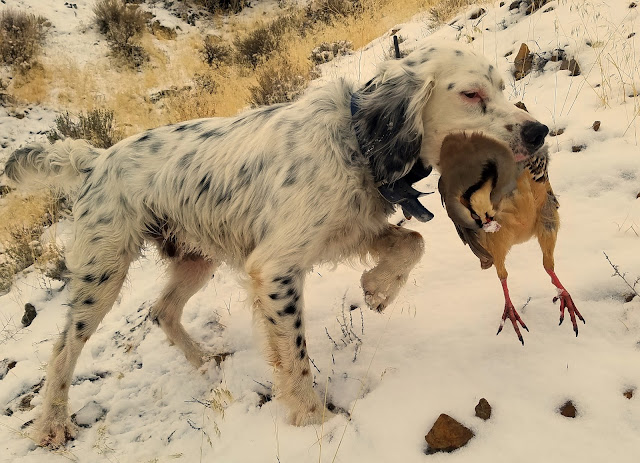 The sunrise is always one of my favorite parts of the day. I think I prefer it to the sunset, because the sunrise represents the beginning of a day full of possibilities, where the sunset is simply the beautiful close to the day. Today however there would be no sunrise. A heavy snowstorm was sitting on top of Tic and I as it started to get light. Instead of black and white slowly sharpening to color with the glowing eastern sky the snow flakes just got whiter and the silhouettes of my seven decoys became visible. It's early December and even though the duck hunt has been open since the first Saturday of October this felt like opening day for me. For a variety of reasons I have not really started hunting waterfowl until after Thanksgiving in recent years. I tried to hunt last weekend but the ducks weren’t using this place just yet. Today was different. We had a hard freeze last week and I was really confident that they would be here now. As it started to get light I could hear the distant calls of hen
mallards off in the distance reassuring my confidence. I always giggle when I hear them going off. The sound of a mallard hen is one of my favorite sounds in the world. There was no wind, but with the storm system running by I was hopeful to have a great duck hunt.

I saw exactly zero ducks for the first 45 minutes of shooting time, and I have to admit it was a little 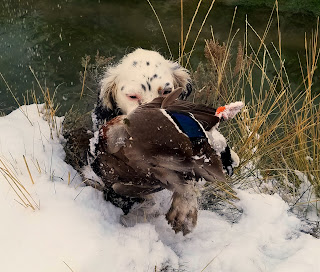 discouraging. I was just starting to think that it wasn’t going to work out at all when the wind kickedup and it started snowing even harder. Like someone flipped a switch I saw the washed out pattern of black specs slowly turn into the silhouettes of ducks in the snowy sky almost immediately. It was a big flock of maybe 20 birds. I wondered if the small stream I was set up on could even hold that many. I picked one of the louder calls on my lanyard and started filling the air with duck, but it didn’t take much. They made one pass downwind then turned and cupped. As they approached I was feeling so alive. It had been a while since I landed a big flock of greenheads. They took forever to close the last 50 yards, but I waited patiently. I shot the last drake in as he was about to land then quickly tried 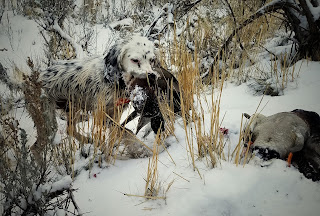 to find another. I know there were a bunch of drakes but my dang gun kept finding hens as they were escaping. At the last second I found another drake and shot him just as they caught the wind and disappeared like ghosts in the snow. By the time Tic returned with the second duck the snow had stopped but the bitter cold wind had not. I normally hate wind. It ruins or makes difficult almost all outdoor activities, but it makes a duck hunt. I will take wind over any other element when hunting ducks. It makes everything easier. It wouldn’t be long before I heard a group of chattering mallard ducks flying behind me. I froze still but I could see that Tic had them spotted.
When they circled down wind I then could see them.
There were 12 or so mallards. I 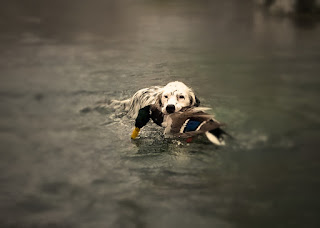 hit them with one big old boss hen, and they ate it up hook line and sinker. Again I waited and shot the last drake in. This time my gun found drakes quick and each shot fired brought another crashing down. As Tic went to work cleaning up I thought I’m shooting this new Winchester SX3 pretty well. Of course the shots were “give-me shots”, but just last week in the chukar hills you would have though I had been shooting blanks. lol As old Tic trotted in with the last duck a pair circled out in front I said “WHOA!” to Tic and he stopped, still holding the last duck. While he stood still there in his snow camo out in the open 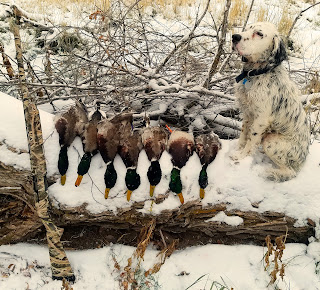 holding that duck as two others dropped in. I shot the drake and watched the hen fly away. Tic dropped his prize to trade up and retrieve the other. This is happening fast I thought 6 already. In no time at all we decoyed another small group of 8 and I was able to shoot the last duck of our seven mallard limit with my seventh shot, believe it or not. We were back and the truck by 9:00.

My hunt is never over at nine. I had the whole day to spend, but I knew what to do. Why not hunt chukar? Sadly my favorite spot out that way has been grazed by sheep, or “meadow maggots” as we call them. There would be no birds there this year. I called a friend and discussed some other options hoping he would be able to join me for the rest of the day. He couldn’t but he helped me figure a good place to go, and an hour later I was standing at the bottom looking up at the mountain.

Tic is not the best chukar dog, but he usually gets it done. So I had high hopes that the chukar hunt would be as successful as our duck hunt. I changed Tic's collar from the SportDOG 1825 training collar to the TEK 2.0 Tracker/Trainer and traded the SX3 for my favorite and ever reliable Browning O/U that I affectionately refer to as Cindy. We worked our way up the hill, and as we reached the top Tic looked a little bit birdy just over the edge, and then turned and locked up hard. I hurried to him, but before I got there the little turd broke point and raced in flushing chukars in every direction. My jaw must have hit the floor as I stood there with my mouth open watching birds fly away. I was so shocked and so mad at him. He has been a different dog since his thyroid has been bad, but he has never done anything like this. He is 7 years old, I thought why would he start this crap now? "Well maybe its a one time thing," I thought. I tried to put it behind me and we continued hunting until he found a single and pointed it, again the little turd broke point, ripped the bird and I had to let it fly away. I ran to him and set him back saying whoa as sternly as he has ever heard. He knew how displease I was with him. As the day went on he kept doing it. In total I had to let six opportunities in a row fly because he kept breaking point. I have to admit I was really frustrated. I thought about retiring him. I thought about starting a new pointer pup. The one that the Mr Wiggins keeps offering me. For the first time in his life I had zero faith in Tic. I was just about ready to walk off the mountain and call it a day when he locked up on point again. Finally, this time he held, and I walked in flushed a single 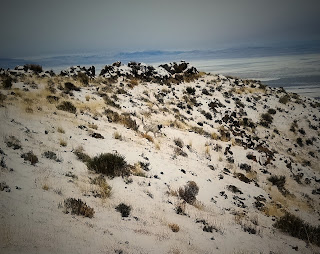 and killed it with my first barrel. (That's 8 shots in a row for those keeping score at home.) I guess I must have made my point because he retrieved like always and his point was fine from that moment on. Bird dogs? They boggle the mind sometimes.

As Tic got his mojo back my shooting would go the other direction. He started getting birds pointed but they were jumping a little bit longer than I would have liked. Probably because we had chased them all over the mountain already. I can normally make those 35-40 yard shots with ease, but I was really struggling now. I lost track of how many misses came in a row but it was more than eight before I finally scratched one down. Then true to form I would shoot my last four chukar with five shots the last of which came over Tic's best point of the day. He was just gorgeous standing at the base of a rock slide. He held strong for a long time. When the birds flushed I shot the 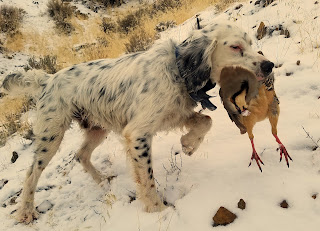 first one that jumped and we were headed home to plan the next adventure. I walked off the hill confident in him again after being ready to retire him only hours before. Tic is a character both good and bad, and he is the strangest dog I have ever owned. I love him, and he is my best bud quirks and all. I wonder if he was ready to retire me when I started missing just as he started holding point again. Probably not. Dogs are more forgiving than we are. When he is gone and I look back on him I’m willing to bet it will be the memory of his little quirks that I cherish the most. Tic is his own dog and God bless him for it.

I'm so hot and cold as a shooter. My gosh I would like to find a nice shade of consistency. There is something about a limit of mallard drakes and a limit of chukar on the same day that is a special combination to me. I can smell the gumbo cooking. 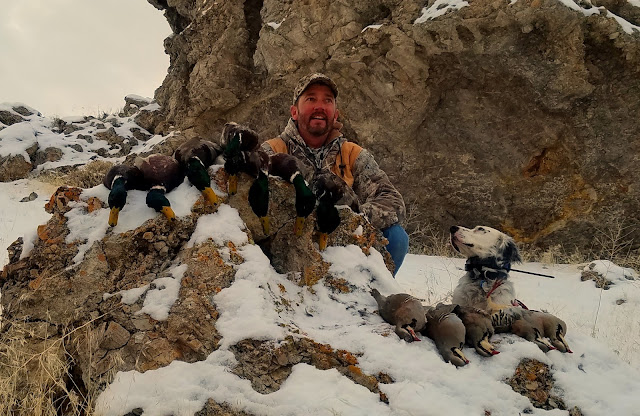 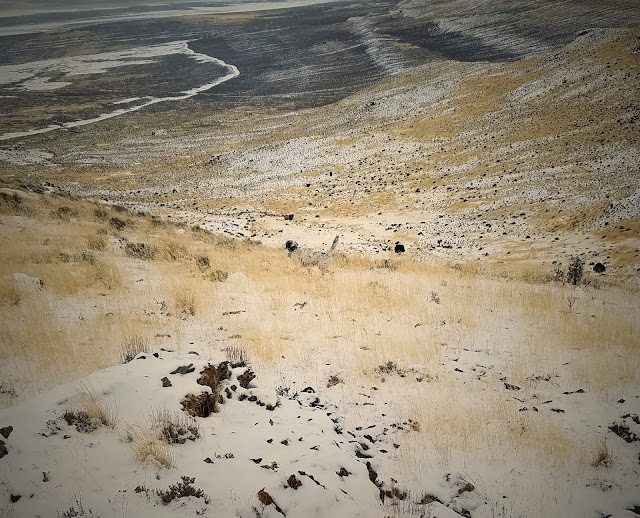 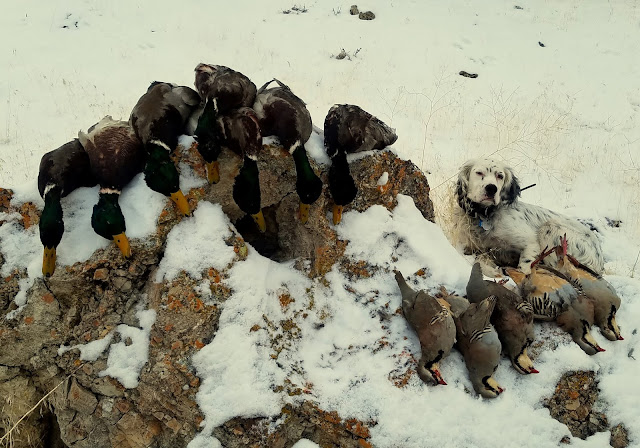 Posted by bquackn@gmail.com at 8:39 AM

Bret, I would like to contact you regarding bloodlines of some setters you had (12-14 yr ago). Do you have an email address?

Yes email me and I will send you my phone number.
bquackn@gmail.com

The small game hunting trip in Norway's Lavvo is versatile and camping in the beautiful terrain makes it even more adventurous. I decided to take the small game hunting package on my visit to Norway. I had to experience the wonderful rocky terrain with its heather landscapes and the professed art of hunting. Click here